“The Now Habit” is about a very specific and important part of the general idea of habit formation. It talks about the importance of self-image and illustrates the non-intuitive idea of why perfectionism is an undesirable quality. 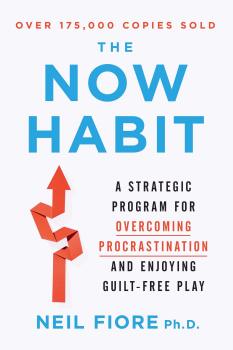 The book pitches itself to be about the idea of procrastination and how to avoid it. But its importance in the overall process of habit formation is understated.

The book makes a distinction between two kinds of people: producers vs procrastinators. It is not that one produces, while the other does not. The difference lies in their “image” of themselves. The book goes on to point out that procrastination is a result of perfectionism. Perfectionists are those who’re unable to mentally separate themselves from their work. The rough chain of reasoning is as follows:

I personally went through each of the above points at least once. I think the above ordering is more for cognitive convenience. For me, the symptoms presented more like a cloud of emotions affecting my abilities in a haphazard manner. Like all chronic procrastinators I presented a very negative self-image and an anxious response to some tasks. I also heavily relied upon self-criticism for motivation and considered my work to be an extension of myself.

I vividly remember reading the following sentence from Atomic Habits:

Behaviour that is incongruent with the self will not last.

And then experiencing it first-hand, when I tried to consciously form habits for behaviour that I internally knew I sucked at. Every failure caused me internal grief, while also not leading to the intended outcome. Before reading the book, I never understood why perfectionism had such a bad name. What could possibly be wrong with wanting to do things as perfectly as possible? I also never understood what was the problem with hating yourself. I thought by hating and criticizing myself, I was essentially prodding myself to do better. Again, what could be wrong with wanting yourself to do better? The book does not present an airtight reasoning, but it does resolve the paradoxical nature of these ideas.

Onward to solving the problem of procrastination, the answer is quite simple. Implement behaviour that describes those who’re considered producers:

I’m in the process of implementing the ideas in the book and have seen some qualitative improvement in my mental health. This was especially useful over some parts of the COVID-19 pandemic. These cycles, vicious or virtuous, take years to form and years to undo. I’ve also started keeping track of time again, as I used to back in 2016. This has brought in measurement, if nothing else to my procrastinating behaviour. About two months after finishing it, I can say that the book has had a positive impact on my life.

The Now Habit is an excellent follow-up to Atomic Habits, even though it precedes the latter by thirty years. It also stands well on its own and can help you come out of a rut, especially on re-reads.