The book’s name and cover led me into believing that it was about how Ranga got his full-pants but that’s only half the book. You have to read the synposis to find out about the other half, which is a different tale set in the same village. 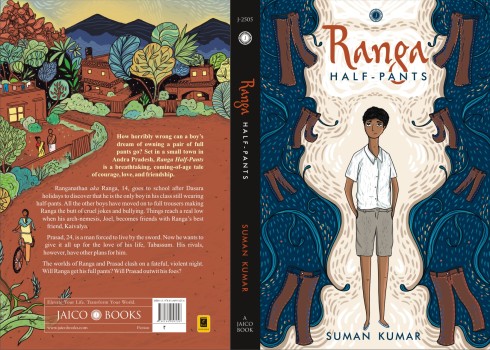 Written by debut author Suman Kumar, his style of juxtaposing italicized Telugu slang against English words initially made the whole experience feel out of place. But then I remembered that’s how almost all English novels written by and for the Indian subcontinent have been for the last decade and half.

Once I got beyond the Angrezi trappings and Telugu lure, the story just about held my expectations from a novel that describes itself as a coming-of-age tale of courage, love and friendship. While Ranga’s colorful friends and experiences provide the novelty, Prasad’s utility is the classic placeholder Romeo to keep the story mainstream.

While there were a couple of instances that made me chuckle, the book is more enjoyable if you can relate Ranga’s experiences to your schoolhood memories. For me personally, switching to full-pants was a non-issue, partly because it was mandated by the school and partly because ( as the book mentions) nobody gives a damn about your pants. Prasad’s tale on the other hand is going to be entirely unrelatable for the kind of people who’d read through the book.

One thing that I constantly kept wondering was: Is the cost of a full-pant even comparable to that of a piece of jewellery? A full-pant for Ranga has definitely got to be cheaper than a mangalyaam for his mother. Any mildly intelligent kid would’ve bothered to atleast compare the pricing and Ranga had plenty of such resourceful friends. Given that the pivotal issue of the story is resolved by a trivial logical argument, I don’t think Ranga’s parent’s reason for not getting him new pants holds any water.

Another thing to ponder upon is the MP who quite readily takes the decision to steer Prasad as his successor but then is also cool with him abruptly deciding to not continue. The switcheroo alone should’ve been a red flag enough for the MP to NOT involve Prasad anymore.

It does not take much to hate the canned villian that is Chanti. Forgettable villians like these are what make Prasad’s underwhelming story an unfit companion to Ranga’s sartorial journey. It even taints the book’s end by pouring bromide all over Ranga’s markedly rocky quest and letting him live happily ever after. In fact, Ranga’s closest friend Gaja is the glue that binds the two stories together and his character is ripe for a much better spinoff a la Huckleberry Finn.

The glossary at the end is a nice way to accomodate non-Telugu readers, though I think footnotes would’ve served the purpose much better.