This is a collection of one act plays; another recommendation from my Mother as a nice way to get used to Elkunchwar’s style. The book is named after the first play and the name seems unrelated to the remaining ones. 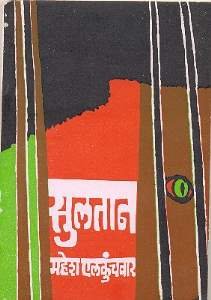 Given that all the plays are completely independent of each other, it makes sense to evaluate them in isolation.

My favorite play of all the ones in the book. I really loved the blend of noir and surreal elements that are the setup of the play.

Thematic elements include the array of telephones, alcohol, a gun, the dull lighting and the unknown time of the day. The surreal element is introduced by the unreliable protagonist, his morphine induced high and the fact that a lion regularly makes its presence felt from the adjacent room.

Rajshekhar is the effective ‘God’ in this closed system and wields considerable power over the other mortals. All the other characters are dependent on him for their needs. The demands of every beggar here are of various forms and can be nicely placed along a spectrum: hunger, finance, love and health.

After getting sufficiently pissed at all the begging, he subdues everyone with morphine expect Sultan the lion. Deeming him unsuited, he ends up shooting the lion in order to rid his hunger.

This play’s setting is very similar to Party: another play by Elkunchwar.

The झुंबर here seems to be a metaphor for the various desires of the protagonist and how they evaporate the minute he acquires them.

He spends the first few pages fawning over his newly acquired chandeliar and is completely over it by the end of the play. This attitude also extends to his girlfriend to whom he is about to be engaged.

As the announcement approaches, he becomes unsure of his feelings for her and cancels the engagement, leaving everyone in a confused state. Since this is the first time he has felt this way about a living being, he is confused and not sure why he isn’t feeling happy or content.

The play spends quite sometime establishing the affluence of the characters and then later shows that amassing wealth and supposed prosperity is not guaranteed to make you happy.

This play begins in a desert, without any real introduction of the characters. We simply know them by the names: Man 1, Man 2, Woman and the Old Man. The Old Man never speaks for some reason but has somehow imprisoned the rest. All of them are bound together by chains and their destination is unknown.

All the prisoners are under duress and tired of walking for so long in the afternoon sun. As dusk approaches, they plot and kill the Old Man, much to their joy. As the night sets in, they are surrounded by wolves and weighed down by a corpse.

It is hard for me to come up with what the play is trying to convey. Initially there is a lot of focus on the dialog between the prisoners. They joke around, play games, curse at the Old Man, discuss philosophy all while periodically complaining of their plight. The play ends on a morbid note, where all of them are condemned to the wolves.

This is hands-down the most surreal of all the plays. It has exactly two characters, both of questionable mental state.

The first is a slightly deranged lady who has been sewing the same blanket for quite some time now. She keeps rambling to herself how the quilt has been the only thing that’s hers now and how everyone has left her behind in this godforsaken village. She often mentions that she doesn’t need anyone and is content with her quilt. Her monologue takes up almost a quarter of the play.

The second is a monk who is travelling through the village and stops by the lady’s place for some rations. She shoo-es him away, but he persists and asks to rest for a while.

Over time both the characters switch their stance to one that is completely opposite to what they started with. This change in character could be considered a nice example of how people often aren’t sure of what they want. I am not sure if that’s exactly what the author wanted to convey, so I am making a guess here.

I had already seen the movie that is based on this play, so I knew what to expect. It starts out in a pretty tame way: some random college students joking around with each other. But then the tension slowly escalates becoming uglier and ends up in one of the students hanging himself.

It presents a series of events which lead up to the ultimate end. Seemingly unrelated goals end up becoming central parts of the play, so you can’t really predict who will do what but most of the motivations behind the actions seem to follow.

It is a nice demonstration of how college has a tendency to warp the perspective of students when its advertized job is to do the exactly opposite. It may lead them to believe that the world starts and ends at the college. And when the repercussions of their behaviour results in them having to face the morbid reality.

This play has quite a few well defined characters and the reader is expected to have knowledge of some stereotypes in order to understand the behavior of the characters.

Jhumbar and Holi are more grounded in reality and feel the most concrete. They also rely on the reader’s prior experience to quickly establish some features of the characters. This is also the reason why all the characters have names, castes, religions and some descriptions of the background.

On the other hand you have the more surreal plays like An Old Man’s Murder and A Barren Village. These plays have less characters, are much lighter on the specifics and are more interested in building the psyche of the characters themselves.

And then you have Sultan which is a flavorful mix of both surreal and concrete ideas and is unsurprisingly placed first.