I started reading this book after having already attempted ( what felt like) a startup and working in a new one right now. The best way to keep up with this book is constant mental questions and thinking about how you’ve been thinking before. An good exercise is to evaluate your own experience or companies that you’ve seen closely as you read through the various ideas presented in this book. 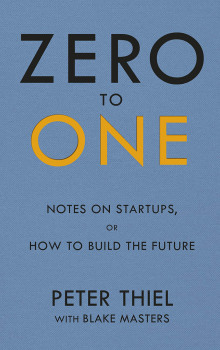 The Challenge to the Future

It begins by explaining what the phrase ‘Zero to One’ actually means and an analogous term used here is vertical development. It presents that technological advancement is far more important for our society to grow overall, while operational advancement (horizontal development) is required to catch up with whatever technology can throw at them.

What important truth do very few people agree with you on?

All happy companies are different

Considering the difference between being valuable and producing value! We’re producing value, just like all the other mystery shopping vendors. But how much profits are we making? How valuable is whatever we have built intrinsically?

The intersection vs union and the manner of how companies try to differentiate themselves from the others.

If your business is in a competitive equilibrium, the death of your business won’t matter to the world. Some other competitor would be standing by to take your place.

All failed companies are the same, they fail to escape competition.

This is a long running chapter and discusses a larger number of ideas than before.

The most interesting one I find is the Don’t Disprupt one. It tends to be one of the most romanticised ideas that one has to disrupt the industry one is getting into. The better alternative suggested is to actively avoid competition as you craft a plan to advance into adjacent markets.

You are not a lottery ticket

It should be an interesting mental exercise to evaluate which of the four possible quadrants could India be placed in.

The power rule is what you should keep in mind before doing anything and keep visualizing it before taking decisions till it becomes second nature.

It mentions that far too many people are starting companies these days. One should always keep the power law in mind and try to be on the higher side of the curve as much as possible. If people were more aware of the curve, we wouldn’t have random people starting companies here and there. It also ends with a nice note on how you cant reliably tell where you are on the curve.

Another couple intereting quotes from the book:

If your goal is to never make mistakes in life, you shouldn’t look for secrets.

Find fellow conspirators who you can share your secret with, because of the power rule most of the world isn’t going to believe you anyway.

While they may be synonyms in English, their use in this context can shed quite some light on the motivations of the various people who are related to the company.

The Mechanics of Mafia

You need a cult cult-like culture.

If you build it, Will they come?

You need sales. Don’t let anybody convince you otherwise. It may be invisible, it may be disguised, but it is there.

Sales is an orchestrated campaign to change surface appearances without changing the underlying reality.

Discusses various founders that have been idolized and criticized by people around the world.

Given that the whole book has a very libertarian feel to it, it was bound to mention Ayn Rand once. I had expected it to champion what she says in her books.

But Thiel ends with the same sentiment that I ended up concluding on finishing The Fountainhead:

her villians are real, but her heroes are fake.

Hate to do this, but I still want to end with a quote:

The single greatest danger for a founder is to become so certain of his own myth that he loses his mind. But an equally insidious danger for every business is to lose all sense of myth and mistake disenchantment for wisdom.

Without new technology to relieve competitive pressures, stagnation is likely to erupt into conflict.

in case of conflict on a global scale, stagnation collapses into extinction.