Having looked at various recommended reading orders and the litany of books that is Discworld, I am unsure if I will ever be able to read through Sir Pratchett’s legacy. Having decided to at least taste the series, I started with the first book, ‘The Colour of Magic’. 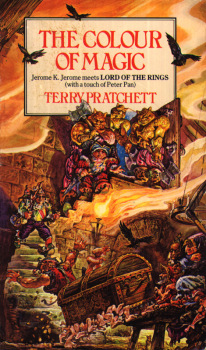 Took me a while to get used to some of the lingo like hubward, rimward, Edgewise and new words like widdershins and turnwise! I am still having problems visualizing the Circle Sea without a map which has been explicitly denied to the reader in the beginning of the book itself. But it looks like the author changed his mind and actually did come up with a map later on.

The book begins with the fire of Ankh-Morpock, triggered not by nature or magic but for an insurance claim. It looks like Morpock is the actual city while the Ankh is the river that flows through it. At least that’s what I gathered from the text.

The writing style has a humorous mannerism to it and I wish to be able to replicate in my prose on demand. But I suppose it takes a British way of thinking to be able to come up with such phrasing on a regular basis.

In the end, the way Twoflower and Tethis go off the rim is fitting to their own goals and motivations. Rincewind lives and yes of course, Death is awesome.

It looks like the only thing that doesn’t need one of those inn-sewer-ants poly-seas is Twoflower’s Luggage:

The Luggage had an elemental nature, absolutely no brain, a homicidal attitude toward anything that threatened its master, and he wasn’t quite sure that its inside occupied the same space-time framework as its outside.