While intended as a satire of the Russian revolution, I think this book has far wider applications. It delivers the quintessential communist microcosm in an amazingly crisp but understandable manner. 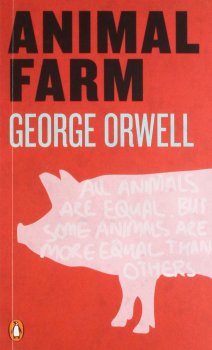 The analogy of a farm is an excellent one in that it effectively conveys the criticism of communism in a microscopic system and the extrapolation to a larger one easier to imagine. There is a huge variety of animals available to demonstrate the various effects that take place inside a given country.

While the original commandments given by Old Major are a decent representation of the original communist ideology, it doesn’t work out as a large part of your population doesn’t understand most of it. This reduces its efficacy drastically as it eventually happens in the book.

The book doesn’t necessarily point out flaws in the idea of communism itself but instead demonstrates how severely flawed humans tend to be. While in theory concepts like capitalism and democracy might sound inferior to communism, they turn out to be much better in practice. This is because they capitalize on the very dreams and goals of individuals instead of treating the people as a homogenous group of humans who all think and want the same things. The infamous software developent adage applies well here: Worse is better.

All that said, one might enjoy and relate to the book much more if one is well informed of the political situations in Europe and America during World War 2. Having managed to read Orwell’s first book, I now want to go back and finally finish Nineteen Eighty-Four after having left it half read so many times.