I began the series after seeing all the seven seasons of the television adaptation. About halfway through I regretted starting the book because I always knew what was going to happen and reading it happen again wasn’t really helping or adding much to the original experience. 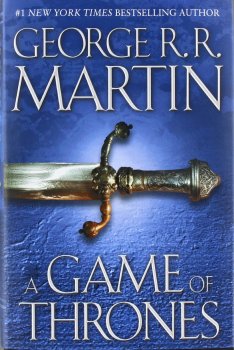 The television show’s script doesn’t divert too much from the first book. Since I’d seen the show, I didn’t feel like I’d missed much at all when reading the book. This is quite in contrast to other serial fantasy books like Harry Potter, Eragon, Golden Compass etc, where the onscreen adaptations leave much to be desired and often are simply bad movies by themselves. Or Lord of the Rings where the on screen adaptations are so well done, that they stand on their own apart from the books. While this is a point in favor of the television series, it always had the advantage of coming much later and also having the original author as a helping hand.

The first book is memorable because it introduces some of the most iconic characters of all time. A prime example is Ned Stark, who eternally sticks around in the reader’s mind, even after being famously executed towards the end of the book. In fact it is that pivotal moment which catapults the series into the business of serious storytelling and not be disregarded as another hunky-dory fantasy adventure.

While to the casual observer, Game of Thrones might appear to be all about wars, sex, castles, dragons, wars and zombies, any half interested follower will tell you that it is all about the people. What really sells the books are the character’s motivations, idiosyncracies, compromises, decisions and most important of all: their loss.

I think everyone who’s seen and loved the television adaptation should give the first book a try. The sheer number of characters and how they come together in the most convincing and coherent fashion is a real indicator of the writer’s capabilities.