I think almost all sci-fi is social sci-fi because it otherwise would have to be science-fact or simply bullshit. This book can be spotted on almost every bookshelf under the classics section and on every ‘to read’ list you can find. Though I’ve never actually met anybody who has read the book. 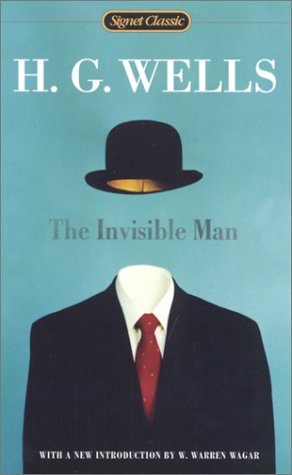 H.G. Wells is supposed to be a pioneer of the Science Fiction genre. I am guessing it was a very intriguing concept when this book came out, because people had no idea what to expect. I also think that most people have in some point of their life wished that they could be invisible for whatever reason. Given this I think most people pick up the book hoping for an insight into how things could’ve been had they been invisible.

The author puts a very important but damning spin on the whole idea by tweaking the concept of invisibility in one simple manner: by removing the ability to be visible again. This simple change modifies the game entirely and also serves as the prime motivation for the titular character. The irreversible nature makes invisibility a crippling characterstic instead of a coveted superpower.

The main point of the book is to show how a seemingly desirable ability can become a deadly problem if it is not well thought out. It is sort of a warning to humankind to be wary of the new scientific advancements that we see and put to use daily without the slightest thought about its long term effects. While the Invisible Man is shown to very capable in his field of expertise, he is altogether short sighted and fully unprepared for the success of his own experiment.

The book is also a metaphorical commentary of how humans tend to be very single tracked and in their tunnel vision tend to solve the problem at hand but create numerous other problems for themselves in the process. They then proceed to justify that their solution to the original problem is a good one and the world needs changing in order to accomodate its adverse side-effects. Griffin (the invisible man) is a specimen of the human condition where he is so engrossed in becoming invisible, he simply doesn’t bother to wait and think if it really is a problem in need of a solution.

Griffin’s temperament is not well suited to being invisible and is the primary reason behind his undoing. Instead of being calm and patient, he is impulsive and often attacks people on the slightest provocation. This works against him at multiple points where he ends up blowing his cover, revealing his identity, committing multiple felonies including theft and murder.

What isn’t clear in the book is whether these irritable tendencies are inherent to his personality or a result of his invisiblity messing with his psyche. It would not be a farfetched idea that the chemicals that alter the refractive index of his body also alter the thinking process of the brain in some way. His new-found motivations of terrorizing Britain might also be a result of the chemicals corroding his mental capacities. This would also explain his inability to come up with a solution to reversing his own invisibility. In effect he is trapped in a hole that he’s dug up for himself and cannot get out of.

The book is a crisp mix of the scientific element, its social aspect and the finale provides the reader with enough awe to get the scientific curiosity going.