A recollection of memories by a celebrity chef before the celebrity, Kitchen Confidential tries to be a curt guide and a memoir, achieving only mild success in both. The book’s “courses” focus on different parts of Bordon’s professional career as cook and then a chef. 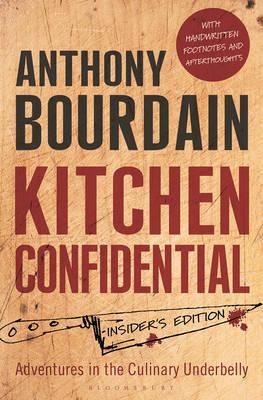 We start with how Bourdain discovered his love for food, onto his first professional experience, followed by a semi-formal education and finally his time as head chef at the Les Halles restaurant in Manhattan, New York.

The book starts off well, with young Tony vacationing with his parents in France. The young lad has no experience with gourmet food and is a picky eater in the mecca for gourmands. His first experience of eating a freshly caught oyster and, in that moment realizing the beauty of food is what really sells the rest of the book. It brings to mind a vivid but pleasant picture of a simpler time. However, as the book progresses, it becomes grubbier and darker. Preparing food is always center stage, but the kinds of people that gravitate to the profession are unimaginable for us ‘civilians’.

The book does get a bit repetitive as there is not enough variation in the kind of people Bourdain encounters or hires. All of them have some combination of money problems, drug addictions, dubious nationality and struggle with horniness. According to the author, these are the only ones able to survive in the grimy world of professional cooking. It seems that only those who’ve exhausted all other opportunities or never had access to saner forms of employment default to cooking as a profession. This leads to a sort of sedimentation effect where the members of the kitchen have a similar lifestyle. Often the grueling nature of their employment leaves them stuck and grinding away at the same role for years at a time. Even accounting for the author’s bias, you’d find similar situations in kitchens across the globe.

About two-thirds into the book, the author does a run-through of his role and responsibility at Les Halles. This is the more logistical and informative part of the book and the narrative element is of less importance here. The book works because the author has a genuine and unfiltered view of the culinary world in the Eastern United States. If you are not an American or European native, prepare to be bombarded by words that will have you wondering if the author is describing a foodstuff or a biological specimen. Personally, I recognized only the ones I’d seen before on MasterChef.

Another aspect the author has a strong opinion on is “Who should start a restaurant?”. He repeatedly comments on the high rate of mortality in newly opened restaurants and how it is always the owner’s fault. Either by being too involved or not enough. He disses those specifically with delusions of grandeur, those who’re led to believe they’re fit to run a restaurant just because they think they understand food a little better than their peers. This part is kinda relatable as I have been on the receiving end of similar suggestions of pursuing a career in the ‘culinary arts’. I presume it’s because I tend to comment on food more specifically than most others do. Even if my commentary had any real value, I’m certain it doesn’t qualify me to be able to handle the pressures of a dinner rush.

Effectively, the author does a good job of driving home the idea that professional cooking is not about experimenting with techniques or gallivanting with exotic ingredients. It is about flawless repeated execution of the exact same recipe a hundred times a day. And as you move higher up the ranks, how it becomes more about managing a logistic and inventory nightmare without keeling over under pressure, every day of the week.

The book’s value as a realistic guide only diminishes with time as the generalized rules and tricks-of-the-trade have become outdated or are too localized. I’d only recommend this book to those who’re planning to start a restaurant or considering a career as a chef. Again, not for its accuracy or anything, but more like the worst case scenario warning: “If you think that you can take even a fraction of the crap mentioned in the book, only then should you seriously consider starting that restaurant.”