I picked this book up, after a friend on twitter mentioned really wanting to gift their copy to a famous politician. What I discovered was a no-nonsense book talking about how to fix your leadership problems. 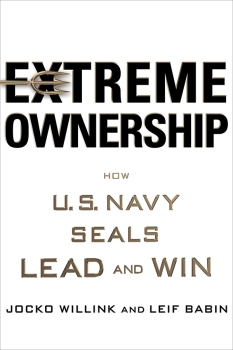 Both Jock Willink and Leif Babin are Navy SEALs who participated in the U.S. invasion of Iraq in 2003. Each chapter has three parts: a story, a principle and an application, giving the biography a textbook-like feel. Every story covers an expedition in Ramadi, where something inevitably goes wrong and the leader of the troops must take a critical, often life-or-death decision. Following this, there is an analysis of the complications that arose and the leadership principles which led to success. The chapters conclude with an anecdotal example of how to apply the principles in a professional environment.

None of the expeditions described are failures, but there are some which barely succeed and lend some excitement to the stories. The authors take every opportunity to point out the SEALs superiority of training and equipment, which becomes repetitive and feels like propaganda after some time. The parts with significant risk of fratricide in urban battlefields, form the more exciting parts of the stories.

The actual advice related to leadership is pretty good and delivered in a no-nonsense style. The book has three parts, each containing individual chapters addressing specific problem areas, making it skimmable. The first one focuses on behaviour intrinsic to the leaders such as shifting blame, egotism and cynicism. The second one is more about the unintentional mistakes such as having a siloed working style, the curse of knowledge, being too detail oriented or engaging in micro-management. The final part is about how to sustain effective leadership one you have achieved some success. It talks about the importance of having a plan, how leaders should traverse the chain of command and decision making under opacity. The book ends with an emphasis on how leadership is a dichotomy between freedom and discipline. It reasons that most leaders fail because they place themselves on either of the extremes, when they should be looking for the middle.

Personally, I felt the idea of “Extreme Ownership” to be a rebranded subset of the “High-Agency” mental model. Both “Extreme Ownership” and “High Agency” emphasize placing the locus of control on the self instead of others or the environment. Extreme Ownership reframes the idea from the perspective of a leader, who in addition to being competent must also enable the success of her followers. As people move up a chain of command, the ability to effectively lead and enable others gains non-trivial importance and becomes a deciding factor of a successful outcome. The book essentially codifies rules and validates the ideas that are already in use by successful leaders.

Finally, I think that the book’s content applies in a non-leadership situations as well. Those who don’t lead others, are still responsible for a specific outcome in their work, and “owning” everything that affects that outcome is fundamental to success. Thus, anyone engaged in employment or business, regardless of their status should find this book interesting.