The Cuckoo’s Egg is a classic computer espionage mystery novel. Set in 1986 we see Clifford Stoll, an astronomer in Berkeley, try to uncover a $0.75 accounting error in their university computer system. This small error soon unravels a maze of trails left behind by a Hacker in the system. 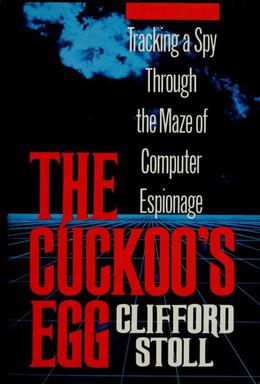 At first glance, the book might seem like an impassionate description of computer hacking. The parts where the author explains to laymen, the idea of root and privilege escalation in the Unix operating system are pretty dry. To alleviate this, we’re intermittently treated to the more natural and heart-warming parts of Cliff’s relationship with his girlfriend Martha.

Cliff soon realize that the problem of tracing the Hacker’s location is an open ended one. Playing by the rules, he makes zero progress. Only when he puts his skill and heart into the problem, does he get some results. He sets up elaborate automation, alarms and trips to collect information on the Hacker’s activities.

As the mystery progresses, we see the Hacker’s supposed location move from the university campus, to all of America and then across the Atlantic, all the way to Germany. Keeping up with the expanding trace, Cliff’s machinery also expands to become more complex and powerful. His experience as an Astronomer also comes in handy when his logbook of observations counts as proof against the Hacker. Cliff’s determination only increases when he deduces that the Hacker is not a harmless student sittng at a computer somewhere. He takes to sleeping at the lab in order to observe the hacker in action, sacrificing time with his girlfriend. Gradually, the story elicits a contrast between the cold-hearted nature of the systems (both electronic and bureaucratic) and Cliff’s personal involvement in tracing the Hacker.

Towards the end, we realize that both Cliff and the Hacker are similarly skilled and differ only in their motivations. They form a strange kind of adversarial relationship, where the former is unaware of the latter’s existence. Cliff also constantly questions his own ethics and rules, trying to determine if he is doing the right thing. Setting up wire traces and leading manhunts for law authorities is not something astronomers or computer programmers are known to do. He could’ve simply blocked the system, but his personal involvement and obsession is crucial to the Hacker’s capture.

Personally, the most amusing bit of the book was how little the attitude towards computer security has changed. People still have issues with password hygiene, unwittingly leave machines open and click on things that are obviously suspect. To put the timeline in context, this book predates the Linux operating system and the Internet.

I’d recommend the book if you have the slightest interest in computer security, Unix, Emacs or the San Francisco of the Eighties.