With a passing interest in superhero movies, I knew that some Marvel characters were based on Norse mythology. So, when this book was going for deep discount, it was only natural for me to pick it up. Written as a personal retelling of the different versions of the Norse folklore, it is reminiscent of Devdutt Pattnaik’s writing. 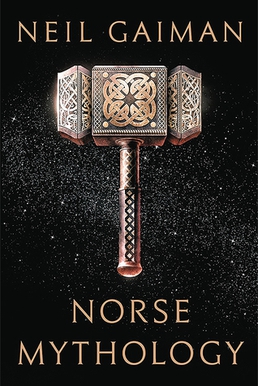 The book is a set of short stories, so you can pick and revisit the bits that are more enjoyable. These so-called gods are as much “humans” as humans are. Similar to Hindu mythos, every god has their own personality quirk and often make ungodly mistakes. It would seem that the only requirement to qualify as a ‘god’, is to have some supernatural power.

Most people will recognize the common characters like Thor, Loki, Odin, Heimdall and even Hel from the Marvel comic books and cinematic universe. If you are in the business of playing ‘spot-the-difference’, you’ll enjoy learning how Odin really lost his Eye and how did Thor really lose his hammer. However, Loki’s mischief in the book is consistent with his on-screen form.

My favorite story is ‘The Master Builder’. A mysterious stranger makes an offer to build a wall around Asgard, in exchange for marrying Freya, the goddess of beauty, sex and fertility. The gods are tempted by the prospect of a free wall, but Freya is unwilling (of course). Loki convinces the gods to mandate an impossible deadline, so that they get to keep the free wall and Freya’s bachelorhood. The stranger agrees to the deadline, and then pulls out a magical horse which speeds up his building process dramatically. The gods start shitting their pants and Freya is like “Fuck You, Loki!”. Since Loki is the one who came up with the brilliant idea, he is forced to intervene. Now, any normal god would resort to gory options like simply killing the stranger or the magical horse. They could’ve also defaulted based on a technicality, but this is Loki we’re talking about here. To keep the stranger from meeting his deadline, Loki transforms himself into a female horse of the highest beauty. He then keeps the magical horse ‘occupied’ until the deadline. Now, magical animals are not uncommon in folklore and mythology, but their seduction by a god is a first. While not all stories are as entertaining, make sure to watch out for the ones with Loki.

Another one of my favorites is the story where Thor travels to the land of the giants. There, he is challenged in games of drinking and running, which he gladly accepts and then loses. Both Thor and Loki are fooled into thinking that they’re fighting giants, when in reality they’re competing the abstract concepts of Wildfire and Thoughts. I guess this could be classified as one of the early versions of a ‘simulation’. Also interesting to note, is the cultural acceptance of alcohol, by implying that the ability to consume large amounts of alcohol is a feat of strength. Again, the gods are practically humans, only placed in supernatural situations.

If one had to compare, the stories and settings are of course different from the Hindu mythos, but the larger ideas are kinda similar. A story feature the idea of ‘Ragnarok’, which can be generalized to the idea of an ever-approaching ‘doom’, followed by a restart in the cycle. This is surprisingly similar to the Yuga-Cycle as seen in the Hindu lore. Even the final battle of Ragnarok has similarities to the Kali-Yuga which is characterized by extreme strife and contention.

Some English days of the week are named after the Norse gods. Tyr’s Day is Tuesday, Odin’s Day is Wednesday, Thor’s Day is Thursday and Frigg’s Day is Friday. It is uncanny, how the Hindu gods also have each day of the week, named after a god. Maybe this is another sign of early organized religion enforcing the fear of gods on the populace?

If you aren’t from an English-speaking country, these stories may hold little value for you. But in 2021, who hasn’t heard of Thor from Avenger’s? :) So it all shouldn’t feel alien either. You’ll enjoy this book if you, like most people, find gods weird and love a good story. Happy Odin’s Day. :P