Eight Worlds… is a collection of eight science-fiction short stories by C.M. Kornbluth, each of which were published during the 1950s. It is a quaint series, where you see varying predictions of the future from the perspective of an author whose world is yet to land on the moon or truly discover the computer. 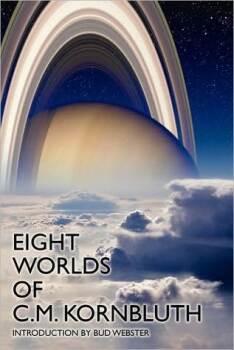 All the author’s predictions with respect to the science and technology are incredibly off, while his depiction of humans is accurate and realistic, since humans have not changed much in the last 70 years. Most of the stories feature a dystopia of some kind, and the first one is also somewhat absurd and humorous. One might assume the author’s best stories seem to be the ones that have a discouraging outlook on the future or do not end in a jovial mood. I personally find the style to be a realistic and unamused view of the world, where the problems are the same as now, even exacerbated. We see passing mentions of pesticides, pollution, over-population, unemployment and other issues that have in reality only become more severe since the stories were written. There are also references to Nazism, slavery and racism, which is also interesting to note, given that the relevant stories take place faaar into the future. Interestingly, even within the stories, the people from the future always seem to have a better life thanks to technology, compared to the ones living in the current time. So the book accurately captures that well-known fascination with the future through its characters.

Published in 1956, The Cosmic Expense Account is the first and more popular of the short stories. It is a fictional account of a concept called ‘Functional Epistemology’, and how mastery over it grants the user powers to alter the real world. Unfortunately, a crazed Miss Phoebe has actually gone ahead and partially mastered the idea. This has caused a ‘plague’ of craziness to radiate outwards, resulting from her brain state. Now the professor who’s written the seminal book on the subject is now on his way to convince her to stop. On his way, he encounters all sorts of bizarre characters including a ‘Duchess’ of Carbondale. The absurdity takes a while to latch onto and extrapolate what is happening, but once you do, it pays off and becomes a fun read.

The Marching Morons is another enjoyable read. It is about a guy who is put into suspended animation and revived far into the future. He awakens to discover a society that is very clearly divided into two, of the intelligent doers who are lesser in number and the dumb consumers who don’t produce anything, except more of their own. Through his 20th century skills, he is able to negotiate power and slowly takes over the world. He starts a covert concentration camp style extermination program, in order to solve the over-population and other problems of that new world. The story is interesting because it brings 20th century themes like eugenics, concentration camps and racism to a society where everyone has forgotten about it. He is unique in his ability to take inspiration from people like Hitler, which is unimaginable for the rest of the people in that society and his atrocities slowly start to weigh in on their collective conscience.

Another great story is Make Mine Mars (1952), about a pressman at the ‘Interstellar News Network’. He is sent away to a backwards, lazy planet called Frostbite where his job is to report on farming and cold weather techniques. There he uncovers a conspiracy of the local client, and discovers the real reason for the lack of development on the planet. Particularly wonderful is the semi-farmland style setting and the now-archaic technology that the News Network uses. It also has interesting predictions about how news would function in a society that distributed across multiple planets and how, similar to countries, the planets would also have specific kinds of economies.

Of some interest is another story called The Little Black Bag (1950). It talks of medicine and how it becomes a field that involves mostly being able to use instruments that do all the hard work, while the doctors themselves only really need to know how to read the manual. One of the characters becomes a fully-capable doctor, purely through understanding how to utilize a high-tech fully automated surgical tool sent from the future. I feel like it has hit a nerve, and is kinda accurate about how a lot of professions right now are only present because nobody has bothered to automate them.

For many short stories, the page count is too low for serious world or character building. Fortunately, most stories in this book do not suffer from that problem. Kornbluth effectively capitalizes on the short story format and experiments with a variety of ideas. Personally, I would’ve liked a few more of the comedies, since he seemed to have a knack for those.