Rebecca is as good an intro to Gothic fiction as it can get. The book is narrated through the eyes of a lowly servant girl who marries Maxim, the enigmatic owner of Manderley, a famed estate in the British countryside. She soon discovers a moody side of Max and various rumours surrounding the death of his previous wife: Rebecca. 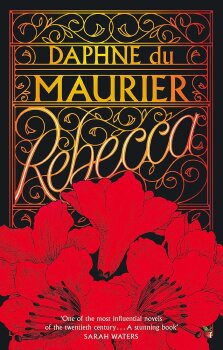 The book really gets going once Maxim and Narrator into the vast estate. The narrator discovers that even though Rebecca’s dead, her towering influence lives on. Her letters, ornaments and other possessions all emit a certain glare that make Narrator feel like an outcast in her new home. Manderley and its inmates are all accustomed to doing Rebecca’s bidding by proxy of Mrs. Danvers, the head servant. The estate operates like clockwork under her direction as she obsesses over the smallest details, reminiscent of Rebecca. As with Rebecca’s belongings, Danvers too passively mocks the Narrator and ensures that she never gets comfortable. Manderley itself has certain parts which evoke Rebecca’s memory, in a ghoulish fashion. The rhododendron bushes, the untouched west wing and the cabin by the seaside are all examples of Rebecca’s memory still being preserved. Anyone and everyone the Narrator meets including her previous employer, the local elites and even Maxim’s grandmother have a high opinion of Rebecca, and can’t help but compare. Maxim himself emphasizes Rebecca’s presence by becoming moody and sulking whenever her name is mentioned, making it obvious that he still lives within the shadow of his dead wife. In contrast, we’re never even given the Narrator’s name and her character is one that simply has things happen to her, usually without much choice in the matter. Even the marriage to Maxim is a nonchalant affair; almost matter-of-fact. There are also recurring comparisons of their stature, way of speaking, confidence and handwriting, all of which serve to further establish Rebecca’s importance over the Narrator. Naturally, all this has an adverse effect on the narrator’s mental health, who already has an inferiority complex due to her prior economic position. She frequently goes into bouts of self-hate and imagines elaborate scenarios about how everyone in the household must be judging her. Even when she manages to work out of this hole and endeavours to impress Max, her efforts are actively thwarted by Danvers. Eventually she is driven close to suicide, only to be saved by an extreme co-incidence.

For most of the book, we’re treated to a version of Rebecca that is impeccable and flawless. In the eyes of others, she can make no mistake and is the epitome of grace. This elevated image is something the Narrator can never hope to achieve and is the primary cause of her self-flagellation. However, once Rebecca’s mortal remains are found, Maxim breaks down and confesses to the Narrator. He finally reveals the source of his moodiness, frets about Rebecca’s adulterous behaviour and justifies why he had to murder her. Powered by this newfound revelation and transparency on part of Maxim, the Narrator goes through an instant change in attitude. She no longer wants to compare herself to Rebecca and is also relieved to find out that Maxim didn’t love her at all. The Narrator’s morals become malleable owing to her weakened mental state after wallowing in the chasm of self-hate and darkness. She willingly assists in covering up Maxim’s crime and becomes an accomplice in the process. We also find out that Rebecca’s private behaviour is the polar opposite of her public image. She’s believed to be an amazing hostess and known for her stewardship of Manderley. Privately, she’s an adulterous sociopath, who threatens Maxim day-in and out. She uses Maxim’s wealth against him and has no qualms about blackmailing him with any kind of ammunition, including a fake pregnancy.

A few chapters into the book, it becomes obvious that Manderley is a symbol of Rebecca’s memory. It achieves its grace and popularity through Rebecca’s care and her death does not mean an end to her involvement in Maxim’s life. Only when Manderley is destroyed, is Rebecca truly out of the picture. Effectively, the book’s primary suspense is the parallel between Rebecca’s murder and the destruction of Manderley. The decrepit imagery in the first chapter foreshadows the idea that Rebecca and by extension Manderley are no longer alive.

The book’s method of constantly belittling the Narrator works particularly well as she also represents perspective of the reader. Since the majority of the readers are also expected to be similarly impressed with Manderley, they go through a similar process of discovery along with the Narrator. We feel Rebecca’s presence as heavily as the narrator does, which makes us equally invested in the story emotionally. Although the idea of being a ‘servant girl’ is a bit dated, it can be trivially replaced to modernize the story and keep it functional. In addition, the early 1900s period of the story does lend a characteristic atmosphere to the story and is even critical for some of the plot elements to work.

Rebecca’s weakest bits are the ones that take place after Maxim’s revelation to the Narrator. The legal exploration of case files around Rebecca’s death are especially lengthy and extend the plot beyond necessity. Even the trip to Rebecca’s retired doctor on the other side of London is tedious at best. The few critical bits of plot that do need to be covered could’ve been a lot more efficient Towards the end, the Narrator’s hallucinations and the fire of Manderley have a muffled impact due to all the ambling around.

Rebecca is a fine read, with two female characters who are the polar opposites of each other. Most of the issues I have are minor, the setting is unique and the air of suspense is effectively sustained for the duration of the book. Read it if you can’t explain what Gothic is or Gothic does.