As the latest entry in the Bobiverse series, Heaven’s River is a departure in narrative and length. It picks up a tangent of the first book where a Bob descendant named Bender sets out to travel into deep space without any means of FTL communication. 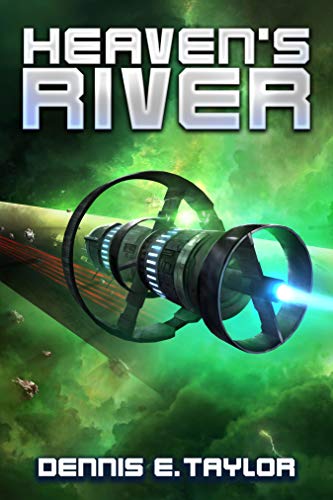 Since the plot is decoupled from the events in the first three books, the author must spend some time setting up the concepts for any new readers. We then see Bob follow Bender’s subspace trail across the galaxy. After traveling for a few light-years, he comes across another solar system, an alien mega-structure around its sun, and the remains of Bender’s ship. Giving up the illusion of solitude, Bob immediately teams up with a few of his other descendants over the FTL communication lines. After some speculation, it is determined that Bender was ambushed and taken inside the large Dyson ring, dubbed “Heaven’s River”. The team starts hatching a convoluted infiltration and reconnaissance plan, complete with semi-autonomous suits designed to mimic the local sentient population. While all this happens, the Bobiverse itself is splintering. Directly transplanting the idea from Star Trek, a group of Bob descendants known as “starfleet” are campaigning for the prohibition of interference in the many civilizations discovered since the early days of Bobiverse. The remaining Bobs’ opposition to this “prime directive” serves as a source of escalating conflict, and subsequently prods starfleet to sabotage significant parts of the Bobiverse infrastructure.

The group of Bobs called ‘Skippies’ and their efforts to build a Matrioshka brain, form the interesting parts of the book. Finally we find someone who is actually interested in the reasons behind the evolutionary drift in the Bob cloning process. It mentions in passing, some interesting ideas and experiments around validating the no-cloning theorem, and how teleportation can be achieved only if the original form is destroyed a la Star Trek ‘beaming’. Unfortunately, none of this gets any real development, and is eventually amde to tie into arc on Heaven’s River anyway. In terms of writing style, the book moves away from the repetitiveness of the VR setting that plagued the earlier iterations. This is probably due to most of the book taking place inside Heaven’s River, where the characters amble around in their suits. Although, this too comes with its own problems, as we shall see.

While I am glad to have made it through all the books in the series, this last one leaves much to be desired. My biggest complaint with the book has to be all the meandering characters, once they infiltrate the Heaven’s River system. Bob and his team of replicants spend large parts of the book just sitting around towns, exploring rivers and jungles and old battered planets. All of this serves only to provide some random bits of information which actually hardly ever gets used and is mostly tangential to the progress of the story. It all could’ve been trivially compressed into some plot contrivances, and made for a more optimally written book. The middle part of the book is such a drab read that I almost abandoned it. I suspect it is this way because of the audiobook release, where such meandering is less punishing and you can basically easy-listen the book. It would also explain the undeserved 4+ rating the book seems to have across websites. Apart from the lengthy nature, the plot itself has non-trivial common-sense issues, mostly around the supposedly perverse instantiation of the Heaven’s River AI. As per the book’s logic, it was smart enough to run the entire Dyson ring, but still prefers breeding out intelligence to ensure species survival, instead of researching space exploration. Even harder to believe is that in the end, a simple chat convinces it of the new plan and makes it roll-back changes it has brought in over several centuries. I was worried that the plot would become inconsistent and make me hurl the book out the window in frustration, but fortunately that was not the case.

Heaven’s River still retains the Bobiverse trademark reliance on sci-fi pop-culture but I wouldn’t recommend it due to its incredibly sloppy length and suboptimal plot. There’s certainly better sci-fi out there that you could be spending time reading or listening to.