I had only seen glimpses of the original Mad Max movies on TV. The post apocalyptic setting never particularly interested me. I still ended up in the theatre when Fury Road was released. 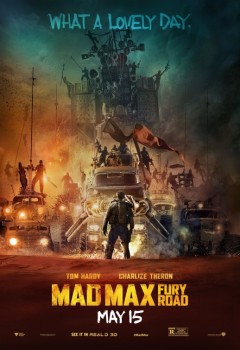 Aaand I loved it.

The movie is a thrilling ride that never lets you rest. One over-the-top stunt after other kept me on the edge of my seat. I could noticeably hear all the other audience gasping after every sequence.

For me, most action movie euphoria tends to fade after a day or two; that doesn’t seem to be the case for Fury Road. I don’t think this movie is going to be forgettable and I’ve made it a point to make sure I watch the original Mad Max movies someday.

What really surprised me was that for most part of the movie the vehicles were actually stationary. This interesting read on how George Miller made excellent use of CGI is very enlightening. No wonder the original movies look very on-earth, while Fury Road looks like it takes place on some other planet. The surroundings are too perfect. No sign whatsoever of any civilization or humans inhibiting the earth.