You’re not going to be able to follow this movie till you’ve seen the first two terminator movies. Since this movie spends most of its time rewriting the stories from the first two movies you should go do it. 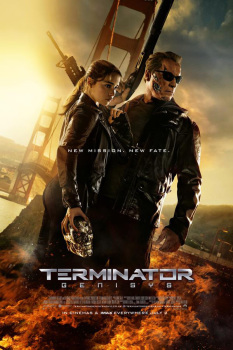 Most of the movie is enjoyable except when the plot tries to explain why things are happening the way they are. You know something is fishy when Kyle Reese can remember an alternate past due to some nexus quantum time mumbo jumbo.

The helicopter scene seems to be pointless and is used only as a vehicle to get all the characters to the Cyberdyne facility. Arnie AKA Pops jumping into the second helicopter appears to offer no advantage whatsoever. I think they just added it so they could use the ‘I’ll Be Back’ line.

Another point I don’t really like is when Pops is humanized to the point where he is not able to kill Sarah Connor by detonating the bombs himself, but is willing to let Kyle Reese do it. This is senseless because he is programmed to keep Sarah Connor alive

It would’ve been more understandable if Kyle Reese was performing the detonation and was unable to decide. He is human and is bound to hesitate before taking such a decision.

Just spending a few years with a human shouldn’t make a terminator susceptible to manipulation. Other things that terminators do such as smiling, wearing clothes and memorizing common lines can be considered efforts to try and blend in. These should never affect the primary objectives of a terminator.

The movie very conveniently leaves a few loose ends to help with churning out more sequels:

To be able to easily recall the timeline I would recommend making a chart similar to this and keeping it handy the next time you try to watch a Terminator movie.