Another day, another Hitchcock movie. I intend to slowly wade through all of them. This one is a supposed thriller where an American reporter is assigned as the foreign correspondent in Europe to cover the events that lead up to a fictionalised World War II. 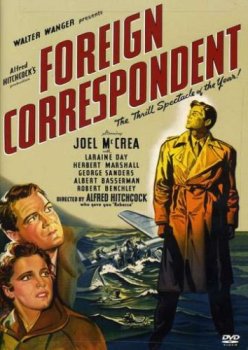 The plot revolves around a peace activist Van Meer who along with a few others is actively trying to prevent the war from happening. Things become complicated when Van Meer is assassinated and there’s nobody left to take his place.

People seem to take Van Meer’s death very lightly. Both ffolliott and Ms. Fisher are seen enjoying the car chase. I hardly think that anybody would be in such a good mood when not ten minutes ago one’s chief guest was shot at point blank range.

Later in the movie when ffolliott reveals his plans to catch Mr. Fisher, one can’t help but wonder why did he not bother to at least have a look inside the suspect windmill that Huntley spotted. Being a reporter, he should at least take note of the instinct of his fellow.

The plan that ffolliott and Huntley cook up seems pretty brain dead. Any plan where you don’t want the kidnappee to know they’ve been kidnapped is bound to fail.

Moreover, the place where Huntley takes Ms. Fisher is quite far away from the city. He should’ve had plenty of time to report his blunder to ffolliott before he goes in to deal with Mr. Fisher.

The visual effects of the plane and its crashing are quite well done for a movie from 1940.