This movie has a very interesting plot where professional photographer L.B. “Jeff” Jeffries is confined to his apartment due to a broken leg. To pass time, he takes to peeping into the lives of his various neighbors through his rear window. 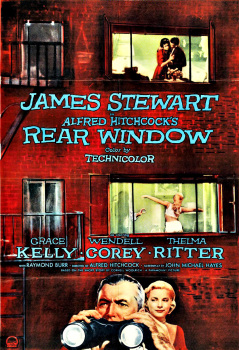 The movie’s visual style is very different from what we’re generally used to and some of the ingredients used are very effective. The whole movie takes place in Jeff’s room with an open view of the apartment complex courtyard.

Jeff becomes suspicious of his neighbor Thorwald, when he leaves his apartment multiple times in the night and his bed ridden wife missing the next day. He constructs a theory where he believes that Thorwald has murdered his wife in cold blood. Jeff’s nurse Stella, his girlfriend Lisa and his private eye friend Doyle all dismiss his theory at first but then slowly get involved as they find out more.

The suspense is always building up as the movie progresses. The plot spins quite a bit, keeping the audience confused on whether the murder actually happened or not.

The ending however is very anticlimatic as you keep expecting one of Hitchcock’s twists but it never happens. Jeff is right all along and they manage to catch Thorwald red handed.

I found the other neighbors and their stories to be tangential to the main plot. Lots of Checkhov’s Guns are never fired. They’re important in creating the environment but are excessively distracting once the main plot takes hold. After a certain point the movie feels drawn out and loses interest of the viewer. The movie could’ve been more enjoyable if the duration was a shorter.

I think that this movie is very experimental in nature and results depend very much on the tastes of the viewer.