I’d first heard of Psycho when I read that there was a tribute to it in Pulp Fiction. This is also supposed to be Hitchcock’s most acclaimed movie. 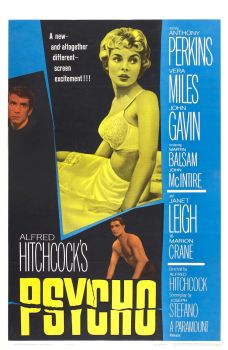 The story builds up slowly as Marion Crane steals $40,000 from her employer in Phoenix, Arizona and hurriedly makes way to her boyfriend Sam in Fairville, California. En route she encounters her boss, a suspicious policeman and also decides to swap her car for another. She decides to halt at a Motel run by a mother-son duo. During her stay, she is murdered by the mother then disposed off by Norman, the son.

The actual murder happens about 50 minutes into the movie. This is quite a long duration and makes the previous details irrelevant. This is also when you realize why the movie is called ‘Psycho’.

When Norman Bates is finally overpowered and captured by Sam and Lila they find out that his mother is actually dead. He is arrested and taken into custody. Norman’s multiple personality disorder is then hastily explained by a psychologist which concludes the movie.

The plot could’ve been significantly improved by involving the suspicious police officer in the murder case. Marion swapping her car has absolutely no effect on the plot and the entire scene could’ve been avoided. The incomplete use of so many plot elements bothers me a lot.

The shower murder scene is supposed to be iconic as nobody was murdered in the shower before that. This and the mental disease may have been new to the audience in that time period but do not age well as they have been used quite often after this film came out.