The second Thor movie that takes place after the events of The Avengers appears to be a pure milking scheme for Marvel Studios and friends. Thor must save his mortal girlfriend Jane Foster from the aether that she’s mistakenly infused herself with. This aether is the most powerful weapon in the nine realms and used by the Dark Elves to convert matter to dark matter. 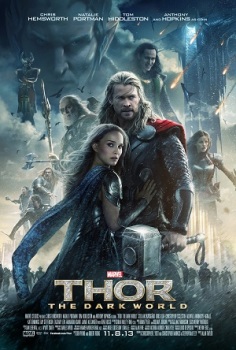 The movie climaxes towards the end of a 5000 year cycle of the convergence of the nine realms. In a Ptolemaic fashion, the Earth is at the center of this convergence and the gravitational disturbances are symptoms of this phenomenon. The Dark Elves plan on using this opportunity to convert the whole universe to dark matter by detonating a bomb on Earth at this crucial point.

Even after having the mighty gods of Asgard involved, the villian Malekith is stopped using human technology where he is anticlimatically transported to his own realm of Svartalfheim and crushed under his own ship.

The film relies entirely on its special effects to lure the audience and its script is a sad statement of the current rut of superhero films. The plot is quite straightforward and makes the twists seem pointless and unnecessary.

Just like the last movie, Thor’s father Odin plays an obstructive role through inaction and is effectively a glorified prop from the story’s perspective. His wife’s death is also inconsequential as Loki would’ve helped Thor anyway if it allowed him to get out of prison.

Heimdall plays the stereotype cool guy who puts his job on the line to help the protagonist while Thor’s other friends fulfil the cliched bro roles. Sif’s apparent attraction to Thor is left undeveloped and is distracting from the plot.

A forgettable jumble of CGI and an average superhero storyline, Thor: The Dark World is barely passable.