Regardless of whether people like or hate this movie, it is different from the usual fare you’ll find in Bollywood. As may not be readily apparent from the title, the movie is about the problem of rampant drug addiction in the Indian state of Punjab. It is a well known fact that it is a systemic problem; one that cannot be fixed overnight or through the efforts of a few individuals. The movie depicts three sets of people who have encountered drug problems in various ways and how their stories converge in a disturbing fashion. 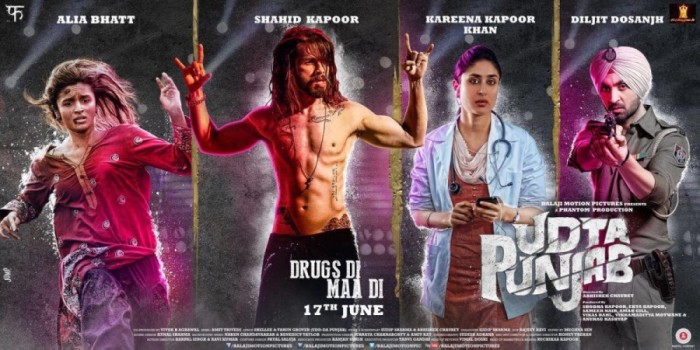 Given the criminal subject matter and somewhat degenerated setting, the film was expected to get into hassles with the censor board. It made quite a few headlines before its release when the producers filed a case against the censor board of India for being too strict and suggesting unnecessary cuts. The high court ruled in favor of the producers and the film managed to get away with just a single censor. I have a fleeting (conspiracy) theory that this was all specifically orchestrated to draw attention to the film before its release. After watching the final product, all the hullabaloo seemed entirely misdirected.

Gabru is unmistakably modeled after the typical Punjabi rapper who spews mindless lyrics about drugs, sex and booze. He is the kind most Indian parents would ostracize for preaching alcohol and drug use in the youth. His story serves as comic relief interleaved between the other two arcs which are much darker in nature. Personally troubled by his cocaine addiction and a severe artist’s block, he is losing his mind. His salvation comes in the form of a chance encounter with an unnamed girl. Gabru’s pursuit to find her is what pushes him to break his habit.

The other two stories are much darker and serve to highlight the plight of the affected people.

While investigating the drug trade that makes a victim of his brother, a policeman teams up with a doctor(ess?) in an attempt to singlehandedly bust the drug trade. As they’re busy collecting evidence and promoting the Coffee Day company, a romantic spark is generated. This was probably done for the one romantic song and is clearly inorganic. The duo get surprisingly far in their investigation, but in the end filmy drama takes over and the doctor has to die.

In the most disturbing arc of the movie, things are not going well for this hockey player turned farm labour. She attempts to fix her life by peddling the inordinate amount of heroine that has literally landed on her head. But as luck would (not) have it, she is captured by the real dealers and forcibly addicted to heroine. Devolving into a sex slave, she relies only on the drug to escape her inhuman situation.

Particularly interesting is her struggle of trying to wean herself off of the drug while still in captivity. Her story is clearly the reason why the movie is so polarizing and I suppose there is no real way to validate if it is an accurate portrayal of the condition in Punjab. In either case, is it a story worth telling? I think it is.

When spoiling oneself with Bollywood produce, one should try to stick to movies that deviate from the commercially available formula. It helps in reminding you that there’s hope.