A movie with an amusing premise where a TV meteorologist Phil Connors, keeps reliving literally the same day again and again indefinitely. The general idea has probably been abused by, inspired and influenced quite a few other films since its release. 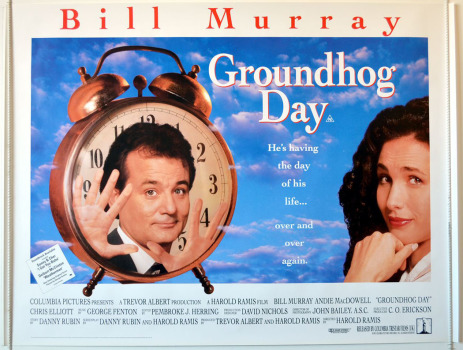 I had originally expected the movie to present some mystery relating to the groundhog and the cause of the repeating days. But the movie does good by itself, not worrying about any explanation at all.

It sometimes ventures close to becoming boring, but is salvaged by bringing along a few entertaining set pieces. But that is all the purpose they serve.

The real problem here is that the movie pitches itself as a romantic comedy. It is hampered by the need to shove in a love story which eclipses the better part of the experience that Murray’s character goes through. Another reason why the love story is unfavourable is because its not at all obvious that Phil Connors is romantically interested in his producer Rita. And when it finally is apparent, it doesn’t feel well developed. Even keeping in mind that he has been meeting her everyday for several days, it is not the case from her perspective.

I am not looking for supernatural explanations here, but the character development should make sense for the movie to work.