The name Inferno and the fact that Dan Brown is involved should be enough to tell you that the movie is about Dante. I am tempted to think that Dan Brown is becoming greedy or being coaxed by his publishers or employing ghost writers, because of the lack of experimentation in the Langdon recipe. 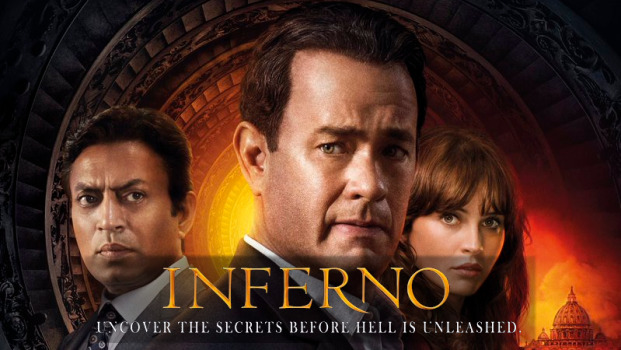 Any Langdon story is not complete without solving at least one anagram while mutilating a historical artifact; involving a carefully constructed twist while the whole world is at risk. Now this may work in the books because there are ample pages to build up to the event, but in a movie we’re left looking at Langdon without the colorful history and other details in his head.

Once The Provost rescues Langdon he goes on to tediously explain how he set up the whole make-believe kidnapping. The audience is expected to interject with surprise but it falls flat. This retrospective clarification is a sign of lazy screenplay and if you have to explain it, you’re doing it wrong.

The movie begins with a struggle for control between what can be divided into three factions:

Almost following a pattern of sorts, these factions keep re-arranging whenever a character dies. Chronologically, the groups and the re-groups are as follows:

In complete Hollywood fashion, only Langdon and his romantic interest Elizabeth survive the drama.

The vivid hallucinations that Langdon keeps having throughout the film are really cool and could’ve done with more screen time and plot impact, but are mere decorations.

The movie doesn’t hold up even if you haven’t read the book.