I first heard about Weekend at Bernie’s when I found out that Jaane Bhi Do Yaaro was inspired by it. I really enjoyed the Indian work and wanted to see if its stimulus was any good. 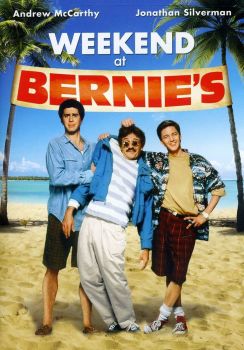 It is also mentioned in multiple sitcoms and TV shows where it is often a favorite that characters are ashamed to admit. I finally got the time and the correct streaming service from where I could actually see the film.

Having seen the movie now, I can safely say that Jaane Bhi Do Yaaro is a much better adaptation of the idea. The idea of a couple of goons carrying a corpse around, while trying to make it look convincingly alive is an amusing one at first glance and enough to attract the initial eyeballs. It is however the substance of the remaining story that defines if the gimmick works at all and if the audience willingly plays along.

The goons constantly try to keep up the convincing act and the corpse quite supernaturally keeps following them around. The movie is essentially a string of coincidences that lead to various situations where other characters almost realize that Bernie’s dead but simply don’t.

The joke is supposed to keep the audience laughing for the full 110 minutes but it really works only for a while. Beyond that, the corpse just hanging around the beach house becomes a redundant mess compared to the colorful variety that is Jaane Bhi Do Yaaro.