It is becoming a challenge to write a superhero movie review these days. My amateur techniques are already falling apart and it is harder to write distinct reviews for movies that are so similar to each other. I await a time when people get tired of the moribund CGI bling that these films have become. 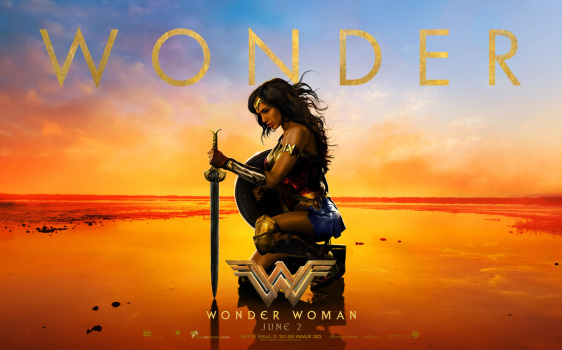 This movie depicts the origin of Diana (Wonder Woman), present curator of the Louvre. It is her narration of the events of World War I triggered by a photograph which is a gift from Batman. The theme is basically the delayed coming of age of Diana and how she loses her naiveté while saving the world in the process.

Literally fresh off the boat, Diana tries hard to maintain her ideology that everyone in this world is good and has been helplessly corrupted by her arch enemy Ares. Unbeknownst to herself, she is Zeus’s daughter and also the only weapon capable of killing Ares. Believing she can kill Ares, she leaves her haven of an island with her recently acquired sidekick who conveniently happens to be a British spy. She goes on to help the British defeat the Germans in a battle, falls in love with her sidekick, defeats who she thinks is Ares, understands the realities of life and finally defeats the real Ares in a clichéd and yawnworthy battle of immortals.

I have a major problem with the film’s chief antagonist: Ares. First of all he doesn’t appear for most of the movie. His actions also don’t seem to affect most of the movie’s characters in any plausible way. His motivations to destroy the world are simply not motivating enough. In fact you won’t even remember him a week after you’ve seen the film.

The real villains in the fray are a stereotypical war era General by the name of Ludendorff and his research chemist Doctor Maru. The General, Ludendorff is just a red herring who snorts random vials of gases and goes around killing his fellow generals willy-nilly. Too late in the movie is it made evident that he serves no other purpose than as a decoy for Diana’s single track pursual of Ares. Isabel Maru too, the movie could’ve done without. The character was probably shoehorned in, to add a female character to the party of antagonists.

It would be ignorant of me to not discuss the feminist aspect of the film. The film takes a few light hearted jabs at the unequal state of women during the war era. It shows how women had no say in political matters and high level decision making. How their attire was heavily influenced by the men with whom they were seen. Men disregard women without much thought and only provide attention when they fit a conventional sense of beauty. Steve’s friends are shown to be innocent to a degree where it is almost out of character for them, and even they ogle at Diana. These aspects lend some authenticity to the film, but are inconsequential against the overall backdrop of the story.

Diana’s sidekick Steve serves a dual purpose. He is the audience’s reference point in the war trodden landscape of the early 1900s as well as Diana’s romantic interest. The second role exists solely because of the age-old rule that a superhero absolutely must fall in love with the producer defined coupling in order to justify a glittering starcast? His stratospheric sacrifice leads to a catharsis, much needed for Diana who is having a major case of existentialism.

The movie ends with a bromidic message of how love is supreme and how it reinforces Diana’s naive view of the world. Honestly, I would’ve liked the movie more if Ares hadn’t appeared at all. A more realistic ending would be how nothing changes even after Diana kills Ludendorff. How she has her innocent perspective of the world shattered when no magical fairytale unfolds. One can always hope.

The good news here is that DC has come closer to cracking the technique that Marvel has been abusing for ages now. I am hopeful that we won’t be seeing any more Batman v Superman style crap in the coming movies.