I haven’t seen many Tamil movies, translated or otherwise. This one however receives a lot of air time on Hindi movie channels for some reason. While I hadn’t seen it completely in one go, it had an interesting concept given the time it came out. After finally seeing it, I can say it turned out to be far more hilarious and much less thrilling. It might even need a genre reassignment surgery. 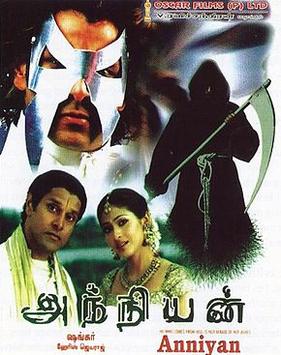 Ambi is a troubled man. Troubled not by the deep existential questions as one should be, but by the blindingly common irreverence of law and order in India. Cue the first twenty minutes of the film where he struggles with basics like ignoring traffic rules, bribing bureaucrats, being okay with letting people die if they’re not close enough to you and a host of other things that come naturally to us Indians. He has also taken up enforcing his love for these rules and laws as a career by becoming a consumer protection advocate. Cue some more shots of him nitpicking with things that most other people wouldn’t bat an eye at.

All this unreciprocated seriousness causes Ambi to double down further on newer violations making it a vicious (virtuous?) cycle of sorts. Since he cannot enough dopamine this way, his anger manifests into a full blown psychotic disassociative identity disorder.

Unbeknownst to himself, Ambi becomes a killer who dons a Krrish style mask and lurks the streets at night. He literally kills anybody who Ambi thinks is not following the laid down rules. The punishment that he deals out is often hilarious and completely unjustified given the allegations. This alter ego, Aparichit has no sense of justice and simply deals out what he feels is appropriate punishment; mostly death by various grotesque and elaborate means. This is an excellent release for the viewers who are tired of dealing with all these issues on a daily basis.

But one mustn’t forget that Ambi is human and therefore also subject to one of the most romanticized human conditions, love. Since he has a major crush on this girl next door, his mind conceives that the only way to profess his love for her is to write a lettter to her parents asking for their daughter’s hand in marriage. Unfortunately for Ambi, the parents turn out to be liberal retards who leave the decision to their daughter instead of forcing it on her like normal Indian parents. The girl promptly rejects the offer as she has some really fancy notions of how love should be, courtesy of Bollywood (or should I say Kollywood?). Given said girl’s disposition to filmfare, Ambi subconsciously pulls a movie-star personality called Remo from his hat and successfully woos her.

A major clash of principles takes place when Ambi sees his now girlfriend bribing a bureaucrat into getting work done. Since he doesn’t have control over his wardrobe of personalities, Remo woos her into a hotel room on the pretext of sexy times, Aparichit then appears and declares his motive of killing her because she broke a rule. She begins running away from what an Ambi who is abruptly switching between himself, Aparichit and Remo. The subsequent chase sequence has got to be one of the most hilarious ones I have seen till date. It includes things like jumping in and out of buses and cars in traffic, climbing up and down conveniently shaped buildings, defeating a full class of martial art students including their sensei, playing around a fully lit pyre with clothes flailing wherever and everything in between. It concludes with Ambi somehow gaining control and sobbing uncontrollably to his girlfriend who he was almost about to set ablaze. This leads the couple to NIMHANS where he is correctly diagnosed and the reason behind Ambi’s issues revealed to the audience.

In an interesting character flaw/virtue, Aparichit is quite tech savvy and opens up a website/hotline to let people report issues with their government in general. He debuts this online platform in a stadium full of people while the police is hot on his toes to catch him. People gladly accept said platform and end up helping him escape the police.

Finally the police investigation zeroes down on Ambi being Aparichit and arrests him. Since Aparichit doesn’t surface in their initial questionings, the police move onto more deliberate and inhuman means of torture to get him to speak. This manages to evoke Aparichit and he confesses his crimes, while alternating between Ambi pleading for mercy as he has no recollection of his other endeavours. With his disorder now out in the open, he is shipped to rehab for two years where he learns to control his superpower. He however relapses soon after he checks out, leaving scope for a future sequel.

Aparichit is a means for the public to channel their disappointment, irritation, hatred and powerlessness against the problems and injustice that they face everyday. It is similar to another Tamil inspired movie called Nayak: The Real Hero, but with an added thriller and psychological element. Psychological disorders like the one presented in the film are great fodder for writers to create content out of thin air. I think the movie is very popular because of the stress-buster effect it has on the average viewer. It however contributes in no real way to actually solving the host of problems it claims India has. Instead it suspends the public in a blob of feel good juice that dissipates the moment they wake up the next morning. It does put up a token of condemnation against Aparichit’s modus operandi, but even that is undone to make way for a possible sequel.

Ideologically too the movie is problematic because its solution of simply killing anybody and everybody who doesn’t stack up against an arbitrary and vague set of rules is itself unlawful and almost religious in a way. Aparichit’s deitification is also apparent in the stadium scene where a swarm of public engulfs him in a form of blind faith. Almost no one in the film follows anything that can be described as a reasonable course of action. Therefore the film is just glorifying popular vigilantism.