A movie with a weird two letter name, if you know how It works, then you know what’s gonna happen. Based on a book by Stephen King (who is said to have written really great ones). It is also a remake of a movie that originally came out in 1990. 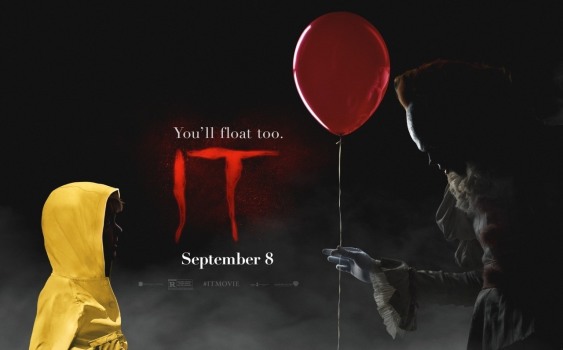 It is a real monster that lives in the sewers of a small American town called Derry. It most often manifests as Pennywise the clown who is actually funny but in a very weird macabre way. You can’t help but laugh and be shocked at the same time as you see him waving a severed arm at you from a bush while you’re being trampled by a bunch of bullies.

The bullies seem wayy more bullier, the kid’s humour wayy more adult oriented and the gore is definitely something you want to let your child see. What bully carves their initials on the body of the kid being harassing? sheesh.

Speaking of the kid, how the hell does he manage to take huge amounts of damage with such little healing? He’s practically the tank of the group. There’s also the druid girl, the melee soldier, the praying monk and the rogue archer. The Losers club is like the full range of RPG characters.

There are other stereotypes too, the hypochondriac, the girl who’s being crushed on by atleast a couple guys from the group. The nerd who puts two and two together and then there’s even the token black kid. Everything you need for an all-inclusive but relatable American movie ;)

A common theme with all the kids is the relationship they have with their parents:

It also seems that It is visible only to kids below eighteen because blood, the leper and jump scary stuff happens only when there are kids around. All adults seem entirely and completely ignorant of It’s existence, which should give some clue about the characteristics of It as a menacing creature. About halfway through it becomes clear that It is just one creature with varying supernatural capabilities, primarily shape shifting which lets it become almost anything a given kid is afraid of.

The premise of the being preying on the children’s fear is well established by the end of the movie and serves well to provide the conventional arc a horror story needs. However beyond that, the story is layered in many different ways including the relationship the kids have with their parents, It’s inability to kill kids who aren’t afraid of him and the small love triangle that appears within the group of kids. All of this is executed well enough that it doesn’t eclipse the primary arc and keeps the story streamlined.

The movie intentionally leaves a lot of things unexplained for worldbuilding purposes and you’re expected to fill some of them based on your movie watching experience.

I had also originally thought that the whole It thing was going to be a suspense/thriller movie with an apparent supernatural element in the beginning but which turns out to be a series of clever set-pieces which lead up to a Scooby-Doo style unveiling. But even before the title comes up, this myth is dispelled when in what is one of the most iconic scenes It LITERALLY BITES OFF little Billie’s arm and then proceeds to possess his remaining body.

As the movie ends, it declares that this is just Chapter 1 in the It saga. I guess we can expect another the next iteration in 2044 since It canonically resurfaces every 27 years to feast on unsuspecting kids.