It is not everyday that you see a movie with a real underlying theme executed so well in Bollywood. Andhadhun seems like it approaches one of those. 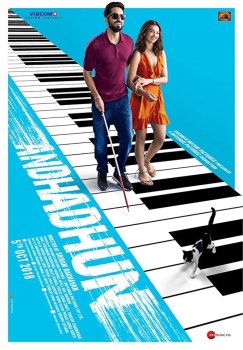 Overall it is a movie with a number of dark themes but presented with a bunch of nonchalance and organic clumsiness thrown in. I was repeatedly surprised that all of it was thought out well enough to present its violent subject matter without letting the audience get depressed.

The movie portrays how everybody has a dark side and how they indulge it to various levels. More importantly, how far they would go to hide it if discovered.

Let’s begin with our hero Akash, who is a pianist. He uses artifical lenses to impose blindness on himself, claiming that it allows him to make better music. However when he meets Sophie, he stops wearing these lenses so that he can look at her while still pretending to be blind.

Moving on, Simi is the wife of yester-year Bollywood superstar Pramod Sinha. She is also an adulteress, who is discovered in a compromising position by her husband. Unfortunately for him, she also turns out to be a real serial killer who executes him in an almost clinical fashion.

Next comes Simi’s lover Manohar, a police inspector who is a subserviant husband but also cheats on his wife. He keeps up the good appearances but also plays fast and loose with the law. Going so far as to frame a random thug for the murder he himself was an accomplice in.

At first glance, Sakhu appears to be your everyday lottery ticket hawker and her husband, a rickshaw driver. But in the night, they’re involved in illegal organ trade facilitated by an unscrupulous doctor. The Doctor himself is a family man as the script tries so hard to tell you, but has no qualms about the foul nature of his work.

Even the minor characters have plenty of chances to show their darker side. Simi’s old neighbor (who is plunged to death) has a habit of spying on visitors through the peephole in her door. Manohar’s wife displays a murderous streak when she’s willing to kill, at first her own husband and then his blackmailers. Even Akash’s kid neighbor is a budding voyeur, hoping to make money selling secretly recorded footage on his mobile phone.

While thematic cohesiveness is a good thing, sacrificing plot cohesivity for its sake is not. The movie barely manages to wrap up its grand plan while still wanting to leave enough ambiguity for sequels to come. And while it has generated enough fodder for avid fans looking for plotholes, I think it has a way to before it can be declared a masterpiece. You should go watch this movie to see what Bollywood can come up with if everyone puts even half their minds to it.