Have you ever wanted to witness Michael Scott actually live out one of his secret spy fantasies (AKA Michael Scarn)? Well you’re in luck. That’s literally what this movie is. 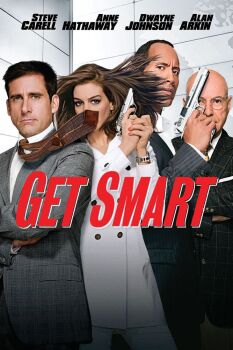 Steve Carrell plays Michael Scott playing Maxwell Smart. The similarities literally never end. The humour on the other hand, is sparse, if any.

His employer is CONTROL, a garden-variety secret government spy organization; complete with its own:

What makes Get Smart a good movie? Nothing.

What makes Get Smart a bad movie?

It is supposed to be a remake of a casual viewing parody TV series of the sixties. But of course, no one who saw the movie knew about it before. So all of those carefully placed references to its lineage are in reality just random things that seem to happen for no reason.

The lack of originality, even in the parts where it is not supposed to be a spy movie is just unforgivable. Even the romance between Carrell and Hathaway is simply a formality in the eyes of the viewer.

Stay away from this tripe.