Ferris Bueller’s Day Off is one of the most iconic teen comedies of all time. It achieves this reputation through the portrayal of the ideal smart-ass teen in the form of Ferris Bueller, who cuts through most teenage problems with his charm, confidence and a knack for fooling adults.

Ferris is the envy of all teens, within and without the film. His bedroom is filled with the latest gadgets and the film’s trademark style of taking the camera aside is a well remembered trope. However, Ferris’s most important possession is the ability to “handle” literally any situation that is thrown his way. His insistence on living his life on his own terms and not as dictated by adults resonates with most people watching the movie. This also means that his character does not change much throughout the film; he was and is always right. To remedy this we’re introduced to his friend Cameron and sister Jeanie. In contrast to Ferris, both the characters have succumbed the rules as laid down by the adults. They work and play within the framework and tend to suffer when things do not work out in their favor. Most teens watching the film are meant to relate to one of these characters as this is what usually happens in real life. Ferris is the anti-thesis to these characters and their reactions to his subversion of the rules is what drives the plot forward.

Cameron is a subdued teen who has responded to the imposed rules by giving up all efforts to live. He’s stopped enjoying most things in life and often prefers to stay in bed pretending to be ill because that’s the easy way out. He responds to Ferris’s attitude by belittling himself and declaring that he’ll never be as cool as Ferris. He also sinks deeper into this emotional chasm of finding everything worthless when they take his Father’s priceless Ferrari for a spin. After spending an entire day with Ferris, he realizes the problem with his negativity and resolves to do better. Things truly escalate when they mistakenly trash the Ferrari when trying to reset the odometer. After some deliberation, Cameron decides to come clean and face the wrath of his parents head-on instead of cowering behind illness.

Ferris’s sister Jeanie has a different way of coping with the high-school agenda. She mostly keeps her head down and follows the rules, hoping to be rewarded for doing so. She is very upset when she sees Ferris breaking them left and right without getting caught. Her fundamental understanding of the world breaks when she realizes that one can thrive without having to follow all the rules to the letter. She reacts to this by first complaining and then trying to catch Ferris red handed so that he may be punished by the elders. She is of course never able to do so. Towards the end, she realizes that Ferris is not her problem and that her incorrect understanding of the how the world functions is the real issue. After this epiphany she rebels against her Mother and has a newfound respect for Ferris’s outlook on life.

Ferris’s parents and high-school principal are an embodiment of the rules which are forever insufficient to keep teenagers in check. Ferris regularly thwarts all attempts at catching him red-handed and even hoodwinks his parents into thinking that he’s a diligent boy who’s just sick for the day. There are various moments throughout the day, where both his principal and parents come almost within reach of discovering his secret, but ultimately fail to do so. This plot technique is regularly used throughout the second act to gradually heighten whatever tension the movie manages to accumulate.

There are a few moments in the film where Ferris’s pitches his thought-process to the audience, point blank. His justification for everything he does is, “Life moves pretty fast. If you don’t stop and look around every once in a while, you could miss it.” Even the post credits sequence is in line with the idea, where he shoos away the audience for spending too much time staring at the screen. His general philosophy seems to be to partake in seemingly risky activities only to show the very limited downsides, while highlighting the enjoyment as a result. A very small example of this is when he makes his friends lean against the glass at the top floor of the Sears Tower. The glass of course prevents them from falling down so the risk is non-existent, but doing it requires one to brave looking at the ground that is more than 400 meters away. 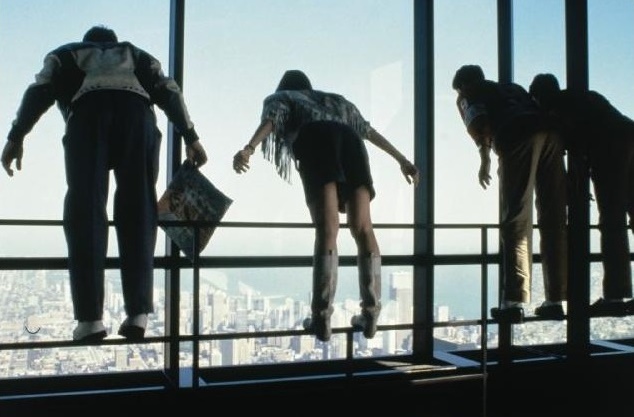 The plot is mostly thematically consistent, though there are a couple unnecessary scenes which it could’ve done without. Ferris’s penchant for breaking the fourth wall and all the shenanigans they engage in, is something you can watch any time, multiple times.