I’ve been told that Americans are obsessed with hair colour, somehow it is supposed to define one’s personality. So naturally, I was expecting a film questioning the legality of it all. You know, how a not-blonde woman tries to get legal recognition for her fake blonde hair? Don’t worry, it’s not that. :) 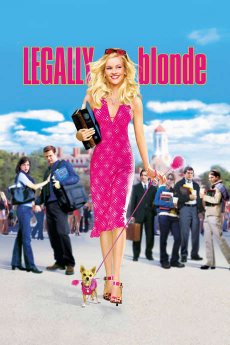 The blonde in question is Elle, a fashion design student. She is freshly dumped by her boyfriend for not being “serious”. Apparently the guy is going to Harvard Law and can’t marry Elle, who is “not serious”. In a bid to prove him wrong, she studies hard over the summer and gets into Harvard. The movie derives most of its humour by taking Elle’s flashy attire and charm and placing her in the dry setting of Harvard Law. Once in the college, she faces a significant amount of disapproval from her peers. Initially, most people discount her for the usual airhead. This sets up most of the next bits where Elle proves them wrong by studying and out-competing other students. She does all this while maintaining her cheery attitude and being kind to everyone. In the end her ex-boyfriend comes crawling back, only to be rejected by her this time.

Similar to Elle’s ever-changing wardrobe, the movie also makes heavy use of a multitude of tropes in a haphazard fashion. Just like Elle’s clothing, it adorns itself with an interesting idea, only to throw it away the next minute. One could even say that the script embodies the spirit of the character 😛. Given this lax attitude, we also see many subplots form and then disappear without a trace. An abundance of things that are shown to happen and are then conveniently forgotten, making for a nice game of “spot-the-trope”. I was amused when I realized that the dogs were only decorative, even though they featured in every scene. Fortunately, the ninety minute runtime ensures a firm upper bound on the number of random plot elements.

Thematically, the dissonance between Elle’s affluence and her ability to outperform her classmates is what keeps the movie going. Towards the end, it does take an uncharacteristic dark turn, what with the sexual harassment and all. But being set in 2001 allows it to gloss over it without much thought. The bits of the movie that are actually related to law are particularly painful to watch. Elle’s refusal to work like a real lawyer and arguing without proof or evidence only exacerbates the problem. It is only Witherspoon’s acting that keeps the film from devolving into a cringefest.

You might find yourself watching this if you have a thing for Witherspoon or have been deluded into thinking that you can get into Harvard on a whim. In either case, this movie will help prolong your detachment from reality.