Two youths are incorrectly charged with a murder but all the circumstantial evidence points to them doing it. If the two are convicted, they will be put to death. The film does an alright job of putting the two in a situation that couldn’t have been a better setting for a comedy. 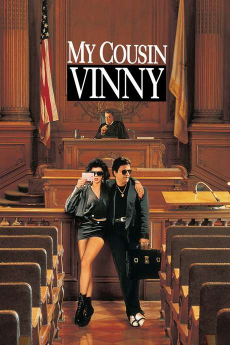 As if all that wasn’t enough, the two boys don’t have any money for a lawyer, so in comes Vinny to represent them. Problem is, he’s a fresh lawyer with no real experience. Vinny’s inexperience and New York attitude causes him to be found in contempt of the rural Alabama court. He repeatedly ends up in jail throughout the course of the trial, only to be bailed out by his girlfriend who’s also accompanied him to the town. During the trial, we see Vinny’s patience and grit being put to the test, all the while dealing with the inconveniences of rural life.

There is a hint of a subplot, where the relationship between Vinny and his girlfriend Mona Lisa is tested. They get in some fights over Vinny underestimating her capabilities and not involving her in the case. This is resolved, when Tomei’s character gets her time in the witness box with her extensive knowledge of automobiles. Her expertise plays a crucial role in helping Vinny win the case and free the youths.

Both Vinny and his girlfriend are completely unused to the life of a small town. Their attire and attitude draws attention as they stick out like sore thumbs. The constant subversion of their expectations from the town is supposed to make the audience laugh. Vinny’s unfamiliarity with and lapses in following the legal process further compound the humour. Hence, most of the comedy relies primarily on running gags. Vinny being sent to jail becomes a daily occurrence. The couple is woken up at ungodly hours due to random small-town noises (though I’m pretty sure New York isn’t very quite either). Vinny’s inability to appear with the proper attire becomes a constant source of irritation for the presiding judge. Often the humour verges on the slapstick, so I am having a hard time finding the right word for it. But it’s definitely of the kind that needs very little setup. A quick way to test this is to replace the individual gags in the film with completely different ones and see if that makes a difference to the plot. In the case of this movie, it doesn’t.

At first sight, this film doesn’t appear to have a lot of depth to it. The entire film can be considered an exercise in rule breaking. Every aspect of the film can be viewed from the lens of how comfortable someone is playing with the rules. Of the two teenagers, one is extremely neurotic about his accidental shoplifting while the other is relaxed and doesn’t consider it a big deal. Vinny himself isn’t a stickler for rules, but pays for it by being repeatedly sentenced to jail since he is unable to follow them. The plaintiff’s attorney sticks to the rules but is otherwise ambivalent to the reality. The judge, predictably, has a responsibility to enforce the rules and tries his best to ensure compliance on Vinny’s part.

About half an hour into the movie, I quickly realized that this film is served as the inspiration for a Marathi movie called Kaydyacha Bola starring Makarand Anaspure as the lawyer. The Marathi movie is also a comedy, but with a moral bend. It made a bunch of statements about how the Indian judicial system is outdated, has arcane and meaningless practices, is susceptible to gaming and indulges in elitist gatekeeping. Unlike the Marathi film, My Cousin Vinny doesn’t really bother with making a statement, moral or otherwise. In fact, Vinny is practically a conman of sorts. He constantly misdirects the judge who’s trying to verify his legitimacy and reputation as a lawyer. At the end of the film, Vinny actually manages to get away with it. So if you really had to learn something, it would be: “you’re a fraud only if you get caught”, right?

A sort of a trial film with a few amusing bits, you can pull out My Cousin Vinnie if in the mood for a Tomei classic or if you have a hankering for a light legal drama.