Cruel Intentions is not your usual American high-school affair. The movie is set apart by its base material, a French novel from the late 1700s called ‘Les Liaisons dangereuses’. I’d wager that the book’s foundation is sturdy enough to let the movie muck around without breaking too many things. 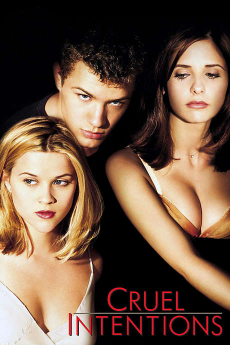 Instead of France around the Revolution this movie is set in the New York of present times and the characters are high-school teenagers in place of the Bourgeoisie. The movie is concise (90m) for all the material it covers. The vengeful lives of two sociopathic super-rich step-siblings are the focal points. Interestingly, most of the movie takes place outside of high-school and both the characters behave a lot more like adults than high-schoolers.

Even though they’re step-siblings, Sebastian and Kathryn are cut from the same cloth. They have the hots for each other, hate everyone else, display a sociopathic attitude towards sex and mostly just want to watch the world burn.

The movie sets up the primary conflict by introducing Annette. She’s a paragon of virtue and her public declaration of chastity makes her a prime target for Sebastian. In the meantime, Kathryn is busy sabotaging her friend’s romantic life in order to exact revenge on her ex-boyfriend. Over time and through tactics, Sebastian successfully seduces Annette only to actually fall in love with her. Inevitably, the two plots collide when Sebastian rejects Kathryn’s advances and she finds out that he’s fallen in love. She takes offence and their sibling rivalry escalates, culminating in a fatal accident for Sebastian. Before he dies, Sebastian manages a small gesture which redeems him in the eyes of Annette.

Sebastian’s transition from a calculating asshole to a feeling romantic, away from the grips of his devious step-sister is supposed to make the movie. The siblings’ adversarial and sexual tension is a pervasive part of their relationship. Seeing it crumble in a spectacular fashion makes for an amusing experience.

The movie has a bunch of flaws, which detract from its effectiveness. Initially Kathryn’s purported motivation is to get back at her ex-boyfriend, but we hardly see him. Her reasons for routing her revenge via her friend are a bit convoluted and half-baked. A more firmer motivation could’ve a direct conflict with her friend Cecile and cutting out the ex-boyfriend entirely. Kathryn’s heavy-handed Christian symbolism is also a bit gimmicky. The movie has issues with late nineties cringeyness, what with all the sunglasses and sports cars, although it didn’t bother me too much.

One might argue that sex is the primary and only theme of the movie. Though I think the siblings’ attitude towards sex is chiefly as a tool of domination. They see sex with someone as a form a conquest or a way of exerting control. If someone is not willing have sex, it must be ‘taken’ from them through lies and deception. Kathryn even mentions that she uses sex as a currency to get things done. Both Kathryn and Sebastian swiftly address any incompatibility with this notion of sex and power. An obvious example are both Ronald and Cecile, who are inexperienced with their sexuality, and maneuvered purely through seduction by the siblings. A corollary of the above is that withholding sex puts a person in a position of power. Thus the siblings treat anyone who withholds sex as a direct threat and challenge. This further justifies their extreme opinion of Annette, whose primary character trait is her chastity. By declaring her virginity and intention to stay one for as long as possible, she places herself diametrically opposite to the two incestuous siblings. She is by definition, impervious to their charms and only through moral hazard will she be controlled.

Despite its problems, the movie manages to entertain rather well. Watch it only if you’re okay with all the sociopathic tendencies.