Sixteen Candles is a John Hughes teenage romance flick that I’d put in the backlog after watching Ferris Bueller. Released in 1984, it casually drops some offensive stereotypes and rapey stuff without batting an eye. 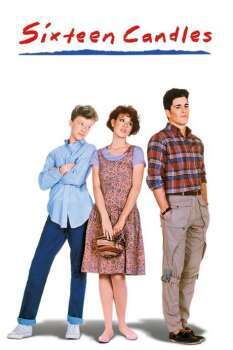 Sam is a teenager who is turning sixteen, which is a pretty big deal for her. Unfortunately, nobody in her family remembers her birthday because they’re too busy preparing for her elder sister’s wedding. Sam’s troubles are aggravated because of her crush on a senior named Jake, who is unaware of her existence. Meanwhile, another nerdy student called Ted keeps bothering her on the school bus. After sulking for most of the day, she goes to a school dance and manages to have an awkward conversation with her crush. She also befriends Ted who offers to talk to Jake on her behalf, in exchange for her underwear. Eventually, Jake meets Sam and they celebrate her sixteenth birthday.

The film has got to be a landmark achievement in the number of inappropriate, offensive and unrealistic things that can be stuffed in a single film, without actually intending to do so. And no, the problem is not with the display of sexual harassment or the ease with which some of the characters express tasteless opinions. It is about the dissonance between what the movie thinks it is about and what it actually ends up showing. There are two ways of interpreting the film. Either as a brilliant piece of art showing how seemingly nice people can hold and propagate the most harmful of opinions without a second thought. Or as a tone-deaf screenplay written without any thought as to what the characters would actually do in real life.

The first hypothesis of the film being a dark comedy has some plausibility. Both Jake and Ted appear to be nice boys, but at various times fall for objectifying the women around them. This is amazingly close to how most women experience misogyny in reality, where it often comes from the people who you least expect it from. Jake damns himself in the eyes of the audience, first by making crude off-hand comments about his drunk ex-girlfriend and then literally ‘handing’ her over to Ted. Ted’s acceptance of Jake’s invitation to have sex with his drunk ex-girlfriend shows that his moral compass isn’t very well developed either. And it’s not just the men, you also see how the women tend to cope with and accept the harassment, often because they have no choice. An example of this is how Ted repeatedly harasses Sam, even after she firmly rejects him. Later on she pities and befriends him, in a forgiving role. Even Jake’s ex-girlfriend find herself in bed with Ted the next morning and has no option but to choose between having ‘enjoyed it’ or not. For the dark comedy hypothesis to truly hold, all significant aspects of the film must be consistent with the perspective, which we see is not the case. An example of this is the Long Duk Dong character, who on the surface appears to subvert existing tropes around Asian American people, but is really just a shell of a character added to the film for cheap slapstick humour. One could even say that the character is the undoing of the film, as his presence uncovers the otherwise hidden lack of depth and nonchalance on part of the writers.

In the other interpretation, we must assume the intention of writing a romantic comedy, which tends to be a non-confrontational genre devoid of polar opinions in favour of audience appeasement. In such a case, some of the characters’ fail the morality analysis completely and it seems that the script is written without any real concern as to their ethics. Unpleasant portrayals of sexual harassment are all brought up and then brushed aside without being addressed, making the film appear spectacularly gray. I couldn’t help but think that the terrible flirting scenes from DDLJ[^ddlj] were inspired by Ted’s repeated attempts to climb on top of Sam in the film. All of this results in an uneven tone, which only pushes us away from relating to the characters or truly enjoying the story.

Thematically, the movie does not stray too far from the staples of the romantic genre. The primary motivation of all the characters is to find love, for different reasons. Sam wants a boyfriend simply mostly because she’s lonely and tired of watching other people hook up. Jake is tired of his current girlfriend’s shallowness and attitude and wants a better one. Sam’s sister thinks that simply marrying a man will make her happy, although she seems to be in a denial of sorts towards the end. Ted hopes to find a girlfriend, if only to prove himself and gain the respect of his peers. Effectively, the film covers most of the excuses that people give to themselves for wanting to fall in love.

Even when given a legitimate chance and considered from multiple perspectives, the film succeeds only in cringing the hell out of its audience. Only those who have been deluded into imagining love to be as hunky dory as Samantha does, will enjoy the film.