With its place at the forefront of the teenage coming-of-age genre, Superbad effectively captures the teenage obsession with sex and alcohol along with the related perils. The heavy use of crude jokes and bodily humours reinforces the idea that the writers took the title as a challenge to their abilities. 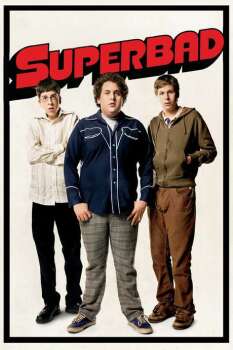 The movie follows the adventures of three high school kids: Seth, Evan and Fogell. Their sole aim is to obtain booze for a party in order to impress girls. Being underage, we see them jump through an impressive number of hoops to procure alcohol, dealing with crazy cops, pervy gangsters and rave parties along the way. The movie relies chiefly on Seth’s opinionated approach to his plans to get laid and whatever slapstick the supporting characters bring to the script. Fogell’s secondary plot features some questionable antics with two policemen, who take him on a massive detour on his way to the party. Together, they indulge in a bunch of vandalism and other questionable behaviour in order to prove to themselves and others that they’re ‘cool’.

There is an obvious dichotomy portrayed in the characters. Seth’s tunnel vision in the pursuit of alcohol and perpetual horniness are representative of every teenager whose access to these things is culturally restricted. On the other hand, Evan represents the slowly creeping sense of responsibility that is also developing in every teenager. He has a hard time balancing the enjoyment of his newly afforded freedoms and his sense of ethics. Even Fogell’s self-doubt is mirrored by the cops, who are also dealing with their own versions of self-doubt.

In addition to the plot, there are a couple backing threads that give the movie some much-needed weight. The film quickly establishes an undercurrent of jealousy between Evan and Seth due to their opposing college prospects. It proves to be effective ground for future conflict when Evan, being the more ‘sensible’ one, wants to back off from a failed plan to steal alcohol while Seth just keeps pushing on. Another critical piece is how the expectations from women are the opposite of what the boys are looking for. Evan’s love interest Becca is sexually charged, while he has a hard time adjusting to his childhood sweetheart being so forward. Meanwhile, Seth can’t wait to get laid and misinterprets whatever interest his crush Jules shows in him as an invitation. This depicts the slowly surfacing complications of dating and romance experienced in adulthood.

Superbad’s lurid script is effectively doused with comedy, somehow keeping the plot intact. It manages to deliver a fully functional film, all the while staying true to the staples of its genre, which is an uncommon feat. I’d recommend it, if you think you can stomach all the raunch.