Kate and Leopold is primarily a Meg Ryan flick featuring Hugh Jackman. Released in the early 2000s, it combines a surprising number of plot threads with a hint of time-travel, while still not feeling like a Back To The Future ripoff. 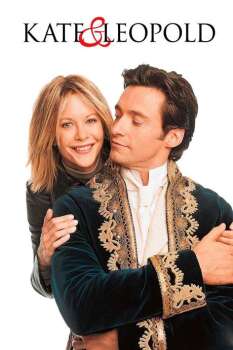 We’re introduced to Leopold, who is a member of the royalty and a struggling inventor in the United States of the 1800s. He spots this random guy taking photographs with a small device and chases him into a time-portal, which transports them to the New York of the early 2000s. There he finds out that the stranger is a descendant of his, named Stuart. Stuart is also an unemployed tinkerer and lives in an apartment building, just below his ex-girlfriend Kate, on whom he still has a dependent relationship. Kate’s job takes up a significant amount of her life, and is perpetually tired of having to support Stuart. Once Leopold arrives in New York, we see the usual tropes of an anachronistic character in an unfamiliar surrounding. His perspective of the habits and trends of 21st century humans is meant to be amusing and his adamant refusal to obey the many rules results in some comedy. We see him impressed with modern inventions like the toaster, the television set and the telephone. However, being an inventor he adapts quickly and is able to reason about and improve these devices. Romantically, most women aren’t used to his Victorian charm and his chivalrous attitude towards women makes him irresistible to everyone except Kate.

Plot wise there’s a bunch of stuff going on, most of which the movie is able to make function. Kate, after being helped out of one too many distresses by Leopold, develops a mutual affection for him. There is a slight conflict, where his proposal to get married does not sit well with her. But after realizing that she’s meant to be with him, she lets go of all her career prospects to travel back in time. This ensures Stuart’s existence as it is revealed that he’s also Kate’s great-great-grandson and also proves how no time-travel story is able to avoid inadvertent incest. In addition, we also see Kate’s brother who is an actor and a romantic, struggling in both cases. He quickly takes to Leopold who guides him in both matters and demonstrating that they’re not too different. This bit works particularly well, as it builds Leopold’s character without having him obsess purely around Kate. It also gives Kate’s character a lot of breathing room and establishes the importance of her career, reinforcing the high-stakes nature of her decision to give it all up.

There are some parts, that could’ve been done better. Stuart’s incarceration ends only because of his apparent relationship with the nurse at the mental hospital. This obviously needed more screen time to work properly, but was likely left on the editing floor. It does affect the story a little, since there is no other obvious reason for him to be able to escape the asylum and help Leopold. I’ve also read that the theatrical cut does not feature an important bit with a photograph of Kate attending Leopold’s ball in the past. Disregarding the mild incestuous undertones, I find this scene to be critical as the photograph is what makes Kate believe in Leopold’s claims of being from the past.

As a romantic-comedy with a hint of sci-fi, Kate and Leopold makes for a pleasant experience. It manages to be alright by not focusing too much on the science and doing a decent job with the script. It can be placed in the upper half of your rom-com list.