Released in 2017, Atomic Blonde takes its name from the late Cold War era setting and the protagonist spy. It amps up the action in exchange for narrative, which is a really hefty price to pay, given the two-hour runtime. 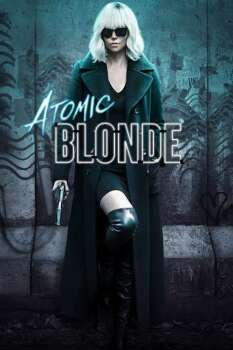 Charlize Theron plays Lorraine, an MI6 spy who’s responsible for bringing back a burn list of operatives, from late 1980s Berlin. My history’s not so good, but the felling of the Berlin Wall represented a massive reduction in the powers of the Soviet Union and the movie parallels its impact on the KGB. The CIA is as usual, present in the background. Things escalate when Lorraine discovers that the burn list has been committed to memory by this savant officer, and that he must be extracted for the mission to succeed.

The plot is fairly contorted to be followed effectively, and includes a bunch of people with unfamiliar names coming and going. It might even be an accurate depiction of the nature of espionage operations, but doesn’t make for a very good narrative. Towards the end, we find out that Lorraine is herself an unreliable narrator, which leaves the audience in the dark, feeling even more powerless. Hell, who’s to say she didn’t make up all the action sequences in her head? :)

The movie relies solely on its action sequences to keep the audience enthralled. The faux-one-shot stairwell fight sequence is technically impressive, and effectively builds tension during the film. It lets the audience very clearly follow what’s happening, without all the messy cuts that Hollywood action films tend to be blamed for. But the scenes could’ve definitely been cast better, as everyone who gets beat is a minor or no-dialogue role. This doesn’t make the individual sequences very distinctive or consequential, lending a low-stakes feel to the thing. The technique has also lost its novelty, so simply having it is no longer enough to make things interesting, plus the audience cant really be bothered about how often you cut the film.

Among other gimmicks are excessive use of covert recordings, which is not out of place in the spy setting. But having a supposedly expert spy like Lorraine fall into these traps should be embarrassing. There is also the passing fascination with wristwatches, complete with gratuitous scenes of characters stealing, wearing, removing, assembling and disassembling them to read microscopically etched information. It even features recurring homages to Trevanian spy novels like Shibumi and The Main.

Atomic Blonde tries to do everything but build a good narrative. It makes me think that they underestimated the amount of work needed to really make a mark in the Cold War spy genre. Watch it over a crappy dinner or when you want to beat stuff up, for no reason whatsoever.