Wedding Crashers is about two men who make a hobby of attending random weddings uninvited, with the intention of convincing women in varying emotional states to have sex with them. The film has some strong opinions about whether this is a good idea and makes it a point to hammer it into the audience. 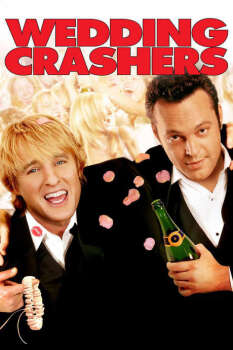 Both John and Jeremy have all kinds of rules and code words which helps them achieve their goal with reasonable success. They target a large and politically important wedding as the final one for the season. Unfortunately for the pair, John falls in love with Claire, a politician’s daughter and Jeremy ends up with her sister Gloria, who is in his words, a “stage-5 clinger”. In pursuit of Claire, John gets them further entangled into the politician’s family where they’re pulled into all sorts of familial activities. Their friendship begins to falter, as it is formed entirely around this gate-crashing, women-bedding dynamic which runs against the ‘real’ romantic feelings that John is now feeling. The conflict splits wide open when the family discovers their true identity and they kicked out of the house.

There are many lurid bits in the movie, particularly the ones involving the politician’s family. His mother, son-in-law, wife, son and daughter all have various interpersonal and sexual issues, and see the two men as opportunities to act them out. They seduce, violate, harass and injure the two friends in a myriad of ways, causing the script to regularly veer into dark comedy territory. It’s almost as if the film wants to punish the men for their past behavior, by getting them embroiled with such a dysfunctional family. It is a form of purgatory, if you will, to make them realize the value of true love. Even the case where Gloria pretends to be an inexperienced lover to get Jeremy into bed, further solidifies the idea of Jeremy having met his match and that it’s time to stop.

What really interests me is how the film cons the audience into laughing at some of the most disturbing behavior. Of the two men, Jeremy is more outspoken, gung-ho, explicit and transactional about the whole wedding-crashing thing. His friend John merely tags along, often reluctantly, and as more of a helper. This cleverly instituted bias ensures that John is at a higher standing in the audience’s mind. It then allows the film to direct most of its misfortune towards Jeremy, since the audience is subconsciously led to believe that he ‘deserves’ it. In reality, John is equally complicit in all the crass behavior and the family has no reason to land all their blows only on Jeremy. Any mistreatment that John undergoes is comparatively mild and far more palatable compared to what Jeremy goes through. We can see this ‘he-had-it-coming’ technique in a scaled down version, where the film allows John to get away with lacing another character’s drink because they have been an asshole during the movie.

As an R-rated romantic-comedy, Wedding Crashers effectively delivers some quite troubling and sexually charged ideas skillfully wrapped in a cute package, complete with a ribbon bow.