Featuring Adam Sandler and Drew Barrymore, 50 First Dates is an interesting variation on the Groundhog Day trope. What matters though, is if the film truly develops the idea or simply uses it as just another plot device to spin out your usual rom-com. 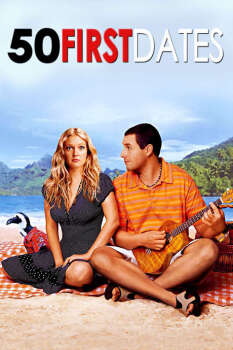 Henry is a Walrus researcher in Hawaii, who falls in love with a woman named Lucy at a diner. When he tries to meet her the next day, he realizes that she has no recollection of him. After further digging around he realizes that she has a mental condition that causes her brain to reset every day, unable to make any new memories. After meeting Lucy’s Brother and Father, he finds out how she was in an accident that caused an injury, and how they must keep pretending that it’s that same day everyday for the rest of her life. After making him aware of the extent of the charade they put up, he is asked to leave her alone. But he’s still really in love with her, so he decides to make her fall in love with him every day.

Personally, I think that 50 First dates raises far more interesting questions than Groundhog Day ever did. Unlike Groundhog, it is the person who is repeating the day who is unaware of it, while everyone else around them is. First, this means that, all the actions have real consequences. Say Lucy’s Father dies, so this ‘event’ will have to be added to the list of all the new ‘memories’ that Lucy goes through every morning. This essentially means that Lucy will relive every single happy or sad ‘memory’ every single day, for the rest of her life.

It also raises doubts around consent for things that have permanency for more than a day and affect Lucy personally. For example, towards the end we see that Henry has married her, and she has two children with him. There is a very fundamental assumption here that if the Lucy of yesterday consented to all this, then the Lucy of today and all future days must also consent to it, since they do not ‘know’ of each other. If this assumption is broken, there is no way for Lucy to verify if she had really consented to all this, which is reminiscent of the ‘living-in-a-simulation’ problem.

Lucy will also always be dependent on someone else, as she will never be able to learn any new skill such as a new piece of technology or take up a new job. Any skills that she already has, wouldn’t improve with practice and will essentially plateau.

Finally, there is the practical concern of compression of memories over a long period of time. For Lucy to be even close to functional, she will have to ingest a large amount of memories every morning. Over time, some pieces will have to be prioritized over others, while others will have to be removed. All of this is going to be a full time job for someone else, who’ll have to act like her real memory bank. Maybe Henry could even configure/program the day’s memories for Lucy depending on what activity he is planning for that day, leaving out memories that he knows won’t be needed.

Of course, all the above assumes that Lucy goes through a perfect reset every morning, which the plot tells us is not the case. There is some random recollection or memory formation happening, albeit in a broken form. Although, the movie does not indicate any possibility for a full recovery, which means that it’s going to be a tough life ahead for Lucy Since the movie doesn’t even try to look beyond the romantic comedy genre, the philosophical elements of Lucy’s condition aren’t really explored in detail. Instead, the movie spends time on gross humor, a bunch of crude slapstick and animal humour to entertain. Most of the animals and supporting characters exist strictly for this purpose including Henry’s friend Ulla, Lucy’s brother Doug and Henry’s assistant Willy.

It’s almost as if a Sandler flick cannot seem to get away from this kind of humor, even when there is obvious potential for more. Unfortunately, 50 First Dates doesn’t do much with all that it has, and becomes just another forgettable film.