Palm Springs is more in-line with the classic time-loop genre, where only the protagonist is aware of the time-loop, while everyone else is practically an NPC. It has two lead player characters which helps to create a far more involved plot, than what we usually see. 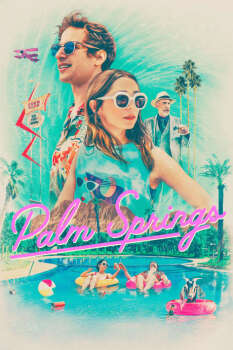 Sarah is attending her Sister’s wedding in Palm Springs, while her own life is a mess. She unwittingly follows another wedding guest Nyles into a cave, which causes her to get awaken on the same day, in the morning. She confronts Nyles, where he explains that similar to him, she is now stuck in a time-loop and will have to re-live the same wedding day for eternity. The movie deals with her and Nyles’ attempts to escape the time-loop and learn more about herself in the process.

As a fast-paced comedy, it contrasts bright colors with a pervasive sense of meaninglessness, to create an amusing experience. At its core, the film wants to explore the personal problems of both Nyles and Sarah, and how they must overcome those in order to exit. Sarah cannot bear to re-live her sister’s wedding each day, as it is a constant reminder of all her failures and mistakes. Her determination begins to stagnate when she develops feelings for Nyles and learns to live a reckless and hedonic life in the time-loop. However, faced with the futility of falling in love in a place that always repeats itself and always being reminded of how she betrayed her sister, she is re-energized to work on her exit strategy. Nyles has the larger issue of not actually remembering his life before he got stuck in the time-loop, which causes him to spend all his time drunk and messing with people. Once Sarah comes up with a potential way to exit the loop, he does not want to leave, exhibiting an aversion to change. Another wedding guest Roy is also stuck in the loop, and his subplot revolves around giving and receiving pain, which further emphasizes the idea that life in a time-loop is practically a hell, both mentally and physically.

At some level, Sarah’s character is all about human agency, while Nyles represents the creeping nihilism that humans experience as they grow older. In terms of their mental age, Nyles is much older and has lived longer than Sarah, so this makes some sense. It also brings up the perspective of how death gives meaning to life, and how if the ‘luxury’ of death is taken away, it is very easy to become disillusioned as Nyles does. In his world, death and therefore life loses all value.

A philosophical difference between the original groundhog and this film is that no amount of repentance, compassion, selflessness or self-acceptance will fix the problem for these two. Only through explicit and targeted action to exit the loop, are they able to make it out. Thus, a possible idea is that there is no magical way to solve life’s problems, other than to actually put in the requisite effort. Another related albeit far-fetched interpretation is that the film is a celebration of human agency and how it can be used to power through the many sufferings of this world. Often, there are moments in life where everything seems to be lost with the only way out being suicide or death. Palm Springs is an exaggeration of this state, where it literally takes away that last option. It leaves you with no choice but to simply tackle the challenge head-on.

Palm Springs doesn’t bother too much with scientific accuracy and focuses on the comedic aspects to ensure that you don’t have too much time to think. A few parts rely on a couple predictable tropes, but they don’t affect the plot adversely. As a 90-minute affair with enough variety, I’d say Palm Springs is a well done time-loop movie.