I recently had an issue with the LC_CTYPE locale variable being set to an invalid value. I searched the complete machine for where it could be set, but was unable to find the configuration location. Further investigation led to the revelation that my local OSX machine config was causing the error on the remote host.

The initial error was from a Python3 program that I was trying to get to run on a remote linux host. The helpful but unexpected error was as follows:

The most obvious workaround was to simply follow what the error recommended and perform:

This causes the locale to be set to predictable values, and allows you to get on. However, I still wanted to understand what was causing the incorrect locale to be configured in the first place.

There were a few odd things I noticed in this case. Once I logged into the box, becoming root or any other user fixed this problem. This was useful information for debugging, later on.

Running locale printed along with the output, the following errors:

Running any apt-get command, also printed this error from perl:

I also noticed in the output of locale, that LC_ALL was not set. This meant that the issue had to lie with the remaining LC_CTYPE.

As mentioned before, root was correctly configured and working fine. So I decided to compare the environment values for the two users:

In the above output, I saw that LC_CTYPE was unset for root and was being defaulted to a valid value of en_US.UTF-8. However, for the ssh user, it was set to the invalid value UTF-8, which caused locale to complain when it was run.

The best solution is to disable forwarding of these variables on the server itself. To do so, you must have access to change the sshd config file at /etc/ssh/sshd_config. Change or remove the AcceptEnv directive which is set to the below value, by default:

You will of course, need to reload the sshd daemon for the changes to take effect. This is the ideal solution, as it allows you complete control over what default locales are used by your users and is also isolated from the the behaviour of individual ssh clients.

If for some reason, you’re unable to change the setting on the server, you can instead fix this for yourself, on the client side. The first approach in this case is to configure your terminal emulator to not set the locale values on startup. This should make all these values default to C which stands for “computer” and is valid across both OSX and Linux.

For iTerm2, you can uncheck “Set locale variables automatically” by going to “Preferences > Profiles > Terminal > Environment”. 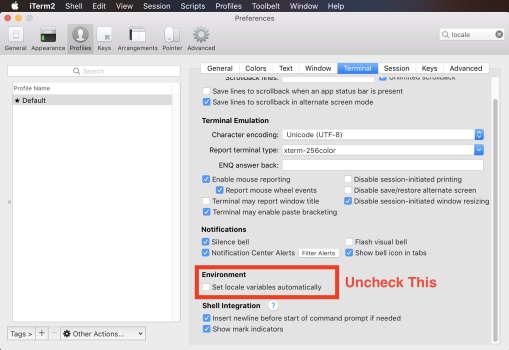 For Terminal.app you need to uncheck “Set locale environment variable on startup”, by going to “Preferences > Profiles > Advanced > International”: 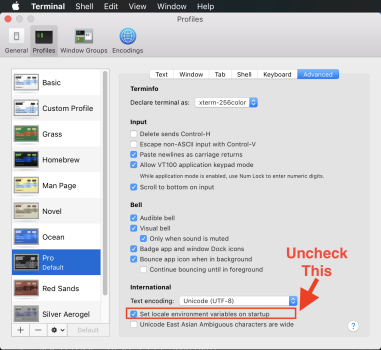 If you want do want your terminal to set locale variables, you can instead disable forwarding these in your ssh client configuration. Change your /etc/ssh/ssh_config or ~/.ssh/ssh_config file to comment out the SendEnv option as follows:

Ideally, you should never ignore warnings/messages related to the locale, unless you know what you’re doing. Often these are indicative of other issues in the system that may not be immediately apparent.

Like most interesting bugs, the cause and effect in this case were so far apart that it took more than a few hops before we got to the root cause. Usually, when facing an error in a remote machine, one would never suspect one’s local machine to be the problem. I still look at the LC_CTYPE=UTF-8 environment variable on my machine and wonder at how harmless it appears.