Having seen the first three seasons I was expecting more use of the mind palace, even more unbelievable cases and more of Moriarty. Turns out I was right. 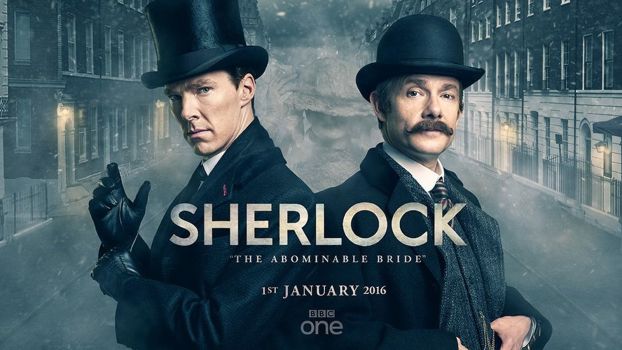 Sherlock Holmes stories have been historically known for their realistic portrayals of things that actually could happen. BBC’s take on the detective’s adventures is known to stretch things a bit here and there, but this episode is a whole new level.

I surmise that this episode was produced to appease the fans who’d been desperately waiting since 2014 for the next season and were not going to get a cookie in 2016 either, as the release dates for the next season have been pushed forward to 2017. Another speculation I have is that fans have been dying to see the period rendition of Cumberbatch and Freeman’s characters. This provided a nice little avenue for the producers to make a single episode that solved both problems in one go.

Now for the actual story, they have to make sure that this single episode fits in well with the chronology of the upcoming fourth season. Providing a nice way to kill conspiracy theories about Moriarty not being dead and also getting a chance to refer to one of the original Conan Doyle short stories, the Abominable Bride is born. The episode also gives a nod to the ‘The Five Orange Pips’.

This is also one of the first episodes to actually discuss and rely on Sherlock’s infamous drug addiction. The entire episode is supposedly fueled by a drug-induced high which allows him to solve a case that took place a couple hundred years ago. I find it a bit far-fetched that this case is used as a justification of the certainty of Moriarty’s death.

Usually Dr. Watson assists the viewer in fathoming the mind of the great Sherlock Holmes. However most of this episode takes place inside Sherlock’s head and as a result Watson is reduced to a mere fragment of imagination and subsequently of reduced utility to the audience in relating to the case. The narrative is confusing as it shuttles between real and imagined versions of both the current day and the past. This is much like how Sherlock’s babble may seem to other characters in the fictional world. Evidently the plot is now over-cooked in an attempt to exhibit his already super powers.

This handing over of narrative control to Sherlock brings out a long held gripe I’ve had with the series. ‘Sherlock’ is essentially a crime/detective drama that doesn’t want you to think at all. It wants you to simply sit down and ride along with the story. That is not how I’d watch a detective drama. In my opinion, relating to the detective (instead of the sidekick) is one of the best ways to enjoy the genre. The viewer should be given a fair chance to solve the crime on his own. You can try and theorize but Sherlock will see things that are never even shown to the audience; which is very convenient.

The famous ‘first-read’ that Sherlock flagrantly recites is slowly becoming an overused trope. The writers need to come up with new ways to explain how he came up with a deduction instead of simply having Cumberbatch spout a monologue.

It should be understood that simply changing the period a show is set in without real effort on the characters is not going to work. I hope the series does not devolve into another show that relies on the first few good seasons for its popularity.