The first of four books in the ‘Bobiverse’ series turns out to be a pleasant read. With a nice mix of self-aware AI action and space-travel, it is directed specifically at engineers and does a good job of it. While more popular in its audiobook form, I still went for the e-book version, being the Luddite I am. 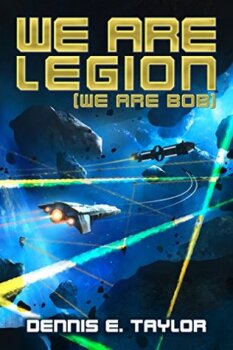 The story starts out with the original single Bob, a human. He is cryogenically preserved, and then a hundred years later, brought back to life as an AI. Tasked with a Von Neumann probe, he is instructed to explore and replicate in outer space on behalf of the future USA. Once he starts splitting out into multiple copies, the story also forks to follow the activities of the many Bobs that come into existence. After this setup, the book’s chief plots are the ones concerning the surviving population on Earth after an all-out nuclear war and another primitive species that the original Bob discovers on a planet of Delta Eridani. There are also minor skirmishes with a similarly capable Brazilian probe called Medeiros, who takes on the role of Bob’s arch-enemy. It also sets up and develops other lesser plots, which will probably take on more importance in the subsequent books.

Because both the author and Bob are programmers, I’m certain the book will feel a lot more relatable to engineers. It does feel kinda at home, when the Bob clones name themselves after things from nerd lore, including the staples like Star {Trek, Wars}, Battlestar etc. I find a certain comfort in knowing that Garfield as a character transcends space and time.

The author’s first-person writing style has a certain nonchalance, which works well given that the Bobs are all sentient AIs with no real stimuli unless they decide so. The characteristic deadpan is exactly how one would anthropomorphize a combination of a software developer, an AI execution engine and large quantities of geek culture.

And because we have always been a cautious person, reconnaissance was going to be a major priority.

I enjoy how the grammar falls short of expressing concepts like clones and leads to non-conventional usage such as plural self-references. It makes obvious the many philosophical ambiguities around whether a clone is different from the original person or not. And of course, that’s just the beginning. It doesn’t take too long for the reader to get used to all the fantastic VR worlds that Bob creates for himself. The conversations, people, environment and animals are all simulations, designed as per each Bob’s specifications. The in-universe explanation is that it is a form of defence against the sensory deprivation that a human would experience after being converted to an AI form. In reality, it is a brilliant excuse to have Bob appear more human-like and not be just a disembodied voice; which would make for a pretty surreal (and tedious) read.

An important point that is left unexplained, is the significant difference in each Bob’s attitude, behavior and opinions. Even though they’re produced from the exact same backups, these deviations are a minor cause of concern among the Bobs. The few hypotheses, such as small quantum differences in the backup process and other chaotic explanations are all admittedly a bit hand-wavy. The antagonistic aspects of some the Bobs, which are yet to take full-form, confirm the eventuality of an inner-conflict on an interstellar scale.

Thematically, the primary plots deal with the interaction between a highly advanced but benevolent AI and mere mortals. It further divides this idea into two, by having the first group of humans be advanced enough and well-aware of the capabilities of a super-AI. The other group is very primitive, barely having entered the stone-age. The contrast between the two groups is immediately obvious and the alternating nature of the story effectively illustrates how humans deal with the idea of superhuman intelligence. The primitive population quickly takes to the idea through deification, since for all intents and purposes the bawbe phenomenon is unexplainable and therefore magic to them. The humans on Earth are a lot more practical due to their advanced knowledge and see Bob as someone to be brokered with. They repeatedly try to negotiate with and take control of Bob, in order to harness his capabilities and advance their own goals. The only reason for their apparent sedateness is the absolute power that Bob wields over them. The difference in the populations is further emphasized by the manner in which the respective Bobs handle these situations. While benevolent in both the cases, Bob-1 can’t help but treat the Deltan population as his personal plaything, having little to no qualms about his own deification. The Bob on Earth, Riker, needs to practice a combination of politics, rhetoric and rational argument in order to make the plan of getting humans off the Earth, work. The humans there see through his strength and are able to make effective use of his benevolence in order to get what they want. The Bobs also realize that some things, such as politics, are universal to all sentient populations, and are a regular cause of exasperation.

In spite of all the nerdy goodness, the story does feel incomplete, concluding only Bob’s original arc of gaining independence from the Americans. It does end on important milestones for both the surviving Earth population and the Deltans. The humans finally become an interstellar civilization, while the Deltans find their first god in the form of Bob-1. Towards the end, the book hastily sets up a few more plots, such as uncovering the existence of an alien race and introducing complications in the Medeiros conflict. There are a few bits of the plot that don’t go anywhere within the first book, such as Bob’s sister’s progeny and the Australian probe. Given all the setup, I would have preferred a longer book than to have this one end somewhat abruptly.

‘We Are Bob’ unapologetically references and relies on pop culture, while also introducing and setting up some interesting plot elements for future books. This is sci-fi, for, of and by the people. It is an enjoyable and binge-worthy read, better judged as an entry in a larger series, than a standalone book.