Intended as a finale for the many plots that began and developed in the first two books, All These Worlds features an increased number of Bobs and Worlds, each with their own problems and personality quirks. 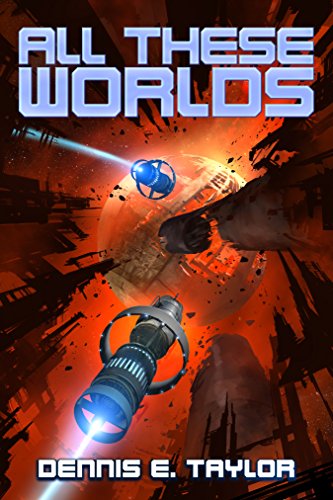 Marking a much-needed return to form, this iteration brings back all the things I enjoyed about the first book, while taking its time to present a reasonable conclusion. There are two major plots: that of the original Bob in Delta Eridani and the ‘Others’ invasion of the Solar system. The remaining stories feature the Bobs in other star systems, including those of Delta Pavonis, Eta Cassiopeiae and Omicron Eridani.

The book revolves around how the Bobs reconcile the death of humans and their own immortality. This is seen in the aging and subsequent death of Bob’s closest friend Archimedes, on Delta Eridani. He spends the last few years of Archimedes’s life helping, guarding and taking care of him, all the while dealing with tribal conflicts that are a indirect result of his own interventionism. Bob’s other clone Howard makes repeated attempts to convince his love Bridget to replicate, once her natural self has passed on. She faces a difficult decision as her children do not want her to come back ‘alive’, and Howard must fight a tedious courtroom battle in order to claim her remains. Bob’s second clone Will also has a hard time adjusting to the idea that all of Bob’s descendants are going to reproduce and eventually die of old age. Instead of forming bonds with individuals, he considers moving to a more ‘amorphous’ model of his lineage. This extended focus on the fragility of humans provides a nice groundwork for the idea of the ‘Others’, who think of humanity as a pests and plan to destroy the Solar System. It also serves to ground the reader, so that they do not feel detached from the high stakes nature of the final battle. As a result, the final battle is satisfyingly entertaining and does a decent job of wrapping up the book.

Some aspects of the plot, I feel, could’ve been done better. For example, the repetitive discussion of the logistical nightmare of getting a million people off the Earth and the gigantic proportions of the alien cargo ship made the Bellerophon a no-brainer and the book took longer than needed to reach the obvious conclusion. The Pav species receive little development conveniently owing to their displeased attitude towards the Bobs, which reinforces their role as a crude plot device. The Bobs also throw a Hail Mary when two Bobs by the names of Icarus and Daedalus literally smash a planet and a moon into a sun to destroy a surrounding Dyson Sphere under construction by the Others. While I don’t have a problem with the deus ex machina of it all, it might have made a lot more sense to attempt a takeover of the star system instead.

Some other bits of plot receive more attention and are better developed. This includes Marcus’s guerilla takedown of an authoritarian regime on a watery planet in Eta Cassiopeiae. Howard’s discovery of floating blimp-like organisms in a super-dense Jovian atmosphere is amusing for both for Bridget and the reader. Technologies such as the android-like ‘mannies’ and FTL communication are variably explored and allow the book to improve its storytelling pace and variety. There’s also the continued development of the unrest amongst the Bobs themselves, especially given the large numbers produced in order to fight the Others.

All These Worlds is definitely more enjoyable and less meandering than its predecessor and while the novelty of the whole Bobiverse idea is starting to wear thin the book still has a few interesting ideas to keep it entertaining.