This is a movie adaptation of the book ‘The Perks of Being a Wallflower ( 1999)”. It is about high school, coming-of-age and finding what you love in the process. 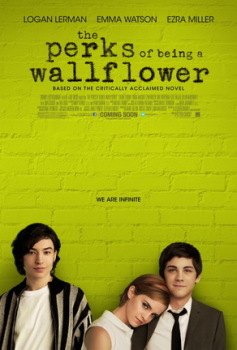 The movie broaches many subjects that are considered to be of keen interest to teenagers such as love, sex and drugs. It is also a movie about the different problems of the American society is where kids are sexually abused, gay people opressed by their own parents, students bullied in high school and segregated on the basis of popularity.

We accept the love we think we deserve.

The protagonist is Charlie, who develops a close friendship with cousins Sam and Patrick forming the misfit gang of the high school. He finds them much more accomodating compared to the rest of the kids at school.

The movie shows that even though people may appear to be completely fine from the outside they may be equally broken from the inside and need as much care as the next patient in a hospital. The movie shows how people are not who they appear to be. The jock you see play the best game of football may have a sweet spot for boys. The drunk girl you see dancing may just want to fit in. The weird boy reading a book in the corner may knock the tallest bullies in a single punch.

The movie’s punchline: You Are Infinite is supposed to be a motivational message to all these people to not forget what they really like to do. It is a reminder that one shouldn’t give in to social pressures and follow the norms just because they are so. It is a message to all those who never managed to fit in the standard definitions of their teachers.

The movie moves at a comfortable pace and keeps dropping hints that something is wrong with Charlie. To the experienced viewer it may be readily apparent that the Aunt Helen character is sinister and a cause of concern.

It ends with Charlie growing up as a person, overcoming his suppressed memories, finding out his passion.

The movie makes a lot of American pop culture references such as The Great Gatsby, To Kill a Mockingbird, The Rocky Horror Picture Show among others; the significance of which will be completely lost to non-american viewers.

All in all, this is an American movie which will be appreciable if you have encountered the American high school culture and its problems at any given point of time. Otherwise do not bother watching it.

I haven’t read the book yet, but I would expect the book to do a better job of explaining references and providing better context.