A movie about how a man comes back from a near death experience and exacts revenge on his deserter for killing his son. Stunning visuals and superb acting are the major facets of this movie. But I think there’s more to it than meets the eye. 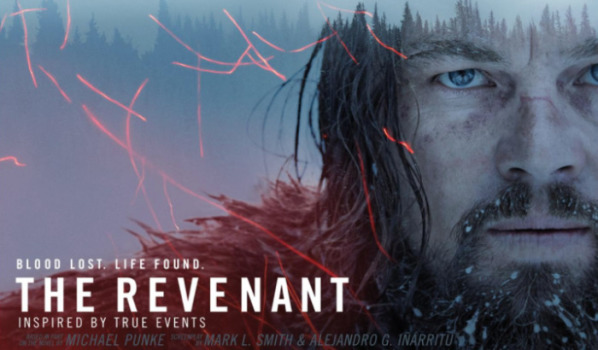 There are times when you encounter a movie where you don’t know if you fully understand it. You feel that there is more to it than what you are seeing. It is hard to discern and makes you want to watch the movie again. I think this is a rare characteristic and speaks about the quality of the movie. Sure, you’re always going to find new things when you rewatch a movie, but consciously realizing that you have missed stuff is something uncommon. And if you cannot perceive this depth, it may be an enjoyable but slightly confusing experience.

The Revenant: a movie where Bear Grylls gets mauled by a bear, gets pissed, does a lot of bear grylls stuff and then some#TheRevenant

The breathtaking visuals of the american wilderness, the intense characters and the crisp storyline make for a truly gorgeous movie. Glass’s survival tactics and motivation are guaranteed to keep you on edge; you will shudder and shake but it wont let you go.

The eyes of the various characters are also a favorite focal point of the camera. They somehow manage to convey exactly what the character is feeling and their depth is comparable to the vast expanse of the scenery. I also think that the main character is named ‘Glass’ because of his blue eyes.

The minimal soundtrack complements the sparse environment really well and is one of the few movies where I actually noticed the soundtrack for being so good.

Even if revenge movies aren’t your thing, I’d recommend watching this movie just for the sheer amount of beautiful landscapes.