I don’t know what these kinds of movies are called but they sure do make investigative journalism look like an intriguing job. The last movie in this genre that I’d seen was The Insider and this one is equally shocking and bound to attract regular gasps from the audience. The movie portrays the Boston Globe’s Spotlight journalist team’s investigation into the sexual abuse scandal in the Catholic archdiocese of Boston. 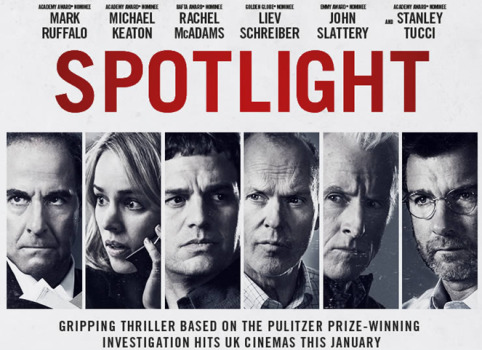 Probed by the newly appointed editor-in-chief Marty Baron, the Spotlight team is retasked with investigating the sexual abuse charges against a couple of priests belonging to the Catholic archdiocese of Boston. They also meet with a couple of lawyers who’ve dealt with these sort of cases before. As more stones are turned, new victims emerge and the story keeps growing.

The catholic church evidently wields quite a bit of influence in various places which helps in keeping the issue under wraps. The real break comes when the lawyer Garabedian goes off-the-record and mentions that some of the documents are already in the public.

Another interesting concern presented is waiting for the ideal time to release an important piece of news. The news outlets have to strategically position their pieces keeping public sentiment, world events and other high publicity news events in mind. It is not as easy as one might expect. This is apparently just a sneak-peak of how much the real world runs on off-the-record conversations like these.

Since the film is based entirely on real events, it is probably not of much use to spot patterns or question the actual events. This leaves me to comment only on how effectively the film communicates the events as they transpired.

I often ponder on whether movies like this rely entirely on story itself to easily cruise through the production. A friend pointed out an interesting approach where you ask that:

If you had not known that it was a true story, would it still have been as effective?

Answering this question requires you to ignore the ‘Based on true events’ declaration in the beginning as well as whatever you may have already read in the news about the given incident.