Happened to see this movie in memoriam Om Puri. I was told that this was a really great ‘art’ film ( as opposed to a commercial one). Named after a short poem by Dilip Chitre, it is a cop’s story that depicts his struggle against the corruption of values. 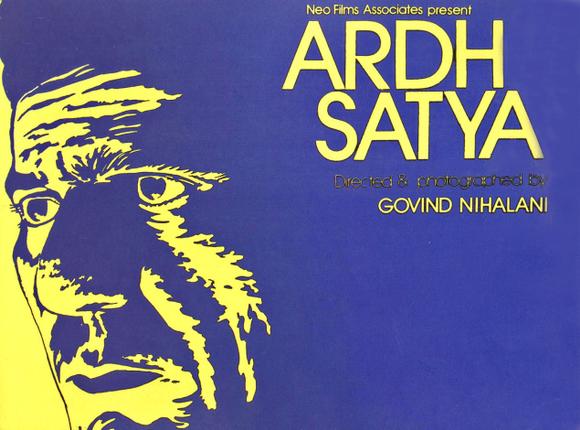 Om Puri plays Velankar, a police officer who slowly figures out the loopholes and chasms of working with his seniors, the local goons and politicians. His gung-ho attitude results in a few fuzzy situations where cozying up to these contacts seems to be the only way out. While one could always argue on how this is a chicken and egg problem, Velankar here is a simpleton and gives in to the most apparent way of making his problems go away.

Velankar’s romantic interest is an outspoken and progressive lecturer by the name of Jyotsna Gokhale (Smita Patil). She is shown blasting some idling profs for their hot air on free speech, revealing her vocal character. While it does convey her stance to the audience, the same zeal never resurfaces in the movie.

Alcohol is shown to be a major cause of the bad decisions that Velankar makes. Jyotsna asks Veli to stop drinking but he seems unable to comply. Our Veli even drunk dials and hurls abuses at the operator but she takes it much coolly than expected. She is always unsure of whether she can continue her relationship with him because of his unpredictable ways.

Veli’s father, a retired police constable is the ideal that he is always expected to live up to. But he is slowly disillusioned by his Father’s less than ideal moments as he grows up. This disillusionment is also what leads him to take decisions that are clearly in the gray area.

Naseeruddin Shah also appears as an always drunk police officer who has the tendency to show up at just the right moments. He serves as a constant reminder to Veli of what could happen to him if he keeps up with his idealist ways.

Initially most of Veli’s problems are sorted by contacts much lower on the political rung. Towards the end in a fit of alcoholic rage, he ends up torturing a suspect to death. To get him out of this situation he must go to Rama Shetty, his arch nemesis. The tall flight of stairs towards the end of the movie is symbolic of the heights that Rama Shetty has ascended to. Contrast this with the shack in which he first appears in the beginning of the movie.

Rama Shetty’s demands make Veli realize the vile personality he is dealing with. In a cathartic moment he chokes him to death in his own house, stands up to his mistakes and surrenders to his seniors. Finally exiting the so called chakra vyuh at the expense of his own freedom.