Based on a webcomic by the same name, Polar is a Netflix production that will be pushed in your face until you give up and decide to click on it that one night when you were feeling a bit down and wanted a nice gunfight to cheer you up. 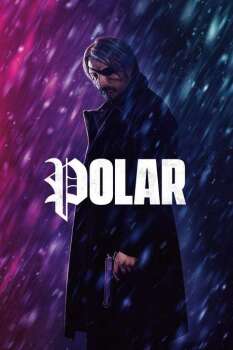 Polar features an assassin called Duncan, who works for a contract killing organization called Damocles. Since he’s about to retire, he’s cashing in on his pension fund with the org. The org has a stupid policy where it expects most assassins to die before they retire, and lets it keep the pension fund. Since this Duncan is so good, he has amassed a large pension and Damocles is not willing to part with it on his retirement. Hence, most of the movie revolves around Damocles’s attempts to kill Duncan and then his attempts at revenge.

It’s hard to say anything good about Polar. It wants to do too many things, and does all of them badly. Of the innumerable problems, the primary ones have to with plot and character. The film wants to tell us that Duncan is a lonely man, who needs affection to heal and make up for all the crap he’s done in the past. It tries to do this by showing us his interactions with pet animals, prostitutes and school children. But all of these are very expensive in terms of runtime and do absolutely nothing to move the plot forward. Duncan never manages to overcome his PTSD, so all that reel is fully decorative. In fact, the movie has no real sense of how to do a three act structure effectively. Duncan’s mission to Minsk as a sub-thread is kinda isolated from the rest of the movie. The only purpose it serves is to let Duncan know that Damocles is after him. It doesn’t however, make sense for why Damocles would send a random incompetent hatchet man to murder its finest assassin. The climactic shootout between Duncan and the premier Damocles assassins happens about halfway into the film, everything after which is a proper letdown.

The movie’s second problem has to do with the supporting characters and their (lack of) development. Duncan’s neighbor Camille confronts him for murdering her parents, a looong time ago. Unfortunately, this happens too late in the movie and Camille’s reasons for forgiving him are not cathartic enough, either for her or the audience. Vivian, who runs most of Damocles has absolutely zero power and blindly takes some of the most terrible decisions, which makes her sassy character extremely hollow. Then there’s Mr. Blut, the head of Damocles, who has got to be the most incompetent and useless villains out there. How he manages to amass that power and keep it for so long is a surprise and reveals deeper issues with the film’s thematic consistency. The group of cartoon assassins receive an undue amount of attention, considering their minor importance to the plot. We see painfully exaggerated sequences of them going through every single house owned by Duncan, as they scour the country for him. And to top it all off, the movie randomly brings in a deus ex machina by the name of Jazmin, who heals Duncan from his torture wounds and then conveniently disappears. It seems that the movie mistakes characters for confetti.

Finally, there’s the completely unnecessary and gratuitous sex, which serves absolutely no purpose other than to shock the audience. Its juxtaposition with an equally blinding amount of violence, gore and torture further numbs the audience to the terrible plot and characters.

Polar is a terrible concoction of a gritty assassin drama and a cartoon-ish arcade-y shootout, with random sex thrown in for good measure. Polar? More like BiPolar…